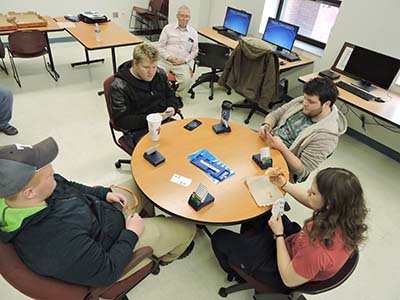 Though often associated with older generations, Bridge is gaining a following on the Trine University campus.

The university’s Bridge Club, competing as the Thunder Aces, took part in the 2019 College Bridge Online Club Special Team Tournament on Feb. 17, sponsored by the American Contract Bridge League (ACBL). The competition included 31 colleges and universities, with Trine winning five out of eight matches — defeating two teams from the University of Chicago and teams from Alabama, Vanderbilt and Cal Tech — and tying for 19th overall.

“I've always enjoyed playing card games, particularly Euchre, but what is special about Bridge is its complexity,” said Cameron Orr, a senior chemical engineering major from Hartford City, Indiana, who serves as Bridge Club vice president. “Whereas Euchre is only played with 24 cards, Bridge is played with all 52 cards, and you have to bid on the number of tricks you think you can take in a hand. It is one of the most complex and strategy-involved card games there is, which is what I like about it.”

Retired chemistry professor Chet Pinkham, who supervises the club, said six of the club’s seven members had never played before joining. Pinkham and Ken Bisson, a retired physician who is an ACBL-certified instructor, teach club members the game and its strategy.

Pinkham recruits members by pointing out the game’s similarity to Euchre, though club members said that, other than that both games involve taking tricks, there is a big difference between the two.

“It’s not like Euchre at all, which is how they originally got us in the club,” joked Allison McCrady, a senior biomedical engineering major from Lancaster, Ohio. “It has a lot of intricacies. It’s been fun to learn the game and improve our skills.”

“I enjoy playing trick-taking games in general, as they require you count cards and keep track of what’s played,” said Brooke Hardy, a senior from Wauseon, Ohio, majoring in chemical engineering. “There’s a lot more strategy in card games of this nature, which I think makes it fun and challenging. I also enjoy that I can play this game outside of our club meetings at game nights, and could play online while I was on co-op, which helped keep me conditioned to play in the tournament.”

Club members have participated in three national collegiate tournaments over the last year, competing against schools such as Harvard, the University of Chicago, Berkeley and Rice University. The tournaments are played online, with groups of four each playing the same hand of cards to see who scores the most points.

“Throughout the progression of the match we have the opportunity to direct message the other competitors at our table and learn more about them,” said Hardy. “The competitions are quite long  —we played from noon-10 p.m. last Sunday — so they can be tiresome, but it’s interesting to see how our team measures up to others around the U.S.”

Orr said he not only enjoys the strategy of Bridge, but the camaraderie it has allowed him to build with friends.

“With Dr. Pinkham's teaching and by playing the game with my friends, I've improved greatly and developed a fondness for Bridge,” he said.

Trine’s Bridge Club will compete in upcoming ACBL collegiate events on April 7 and 14.