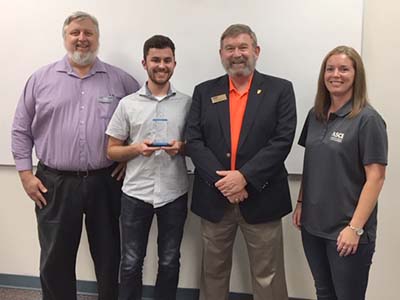 Cagle is one of 15 members of the national organization’s Board of Directors. Region 4 represents more than 13,000 ASCE members from Arkansas, Tennessee, South Carolina, North Carolina, Virginia, West Virginia, Indiana and Kentucky.

Cagle presented Alex Duran, president of Trine’s ASCE chapter, with the ASCE Student Leadership Award. Duran was one of only six students nationwide to receive the honor.

He also recognized Jennifer Sharkey, a 2007 civil engineering graduate from Trine who serves as Steuben County Highway Engineer and practitioner advisor for the Trine ASCE chapter, for being selected as an at-large governor for the Region 4 board.

In remarks to the student members in attendance, Cagle noted that only about 20 percent of student chapter members transition to associate members as working professionals.

“We’ve got to overcome that, because you are the society members that are going to take care of things down the road as some of us are growing older, grayer and more decrepit,” he said.

He then outlined the advantages of ASCE membership. He noted that serving in ASCE leadership has offered him multiple opportunities, including being able to take an Engineer’s Tour of the Hoover Dam.

“I saw bedrock of the river that it’s founded on about three levels below the tour that the public gets to see when the public goes in there,” he said. “Those are the kinds of exciting things we do. It’s an exciting profession.”

He said the organization also has allowed him to build a network of friends around the world, and to learn “skills that you can’t get in your degree program because you just don’t have time” through conferences and continuing education.

One such skill, he said, was public speaking. He recalled the first time he was called upon to speak at a public meeting.

“My heart was beating so hard that I had to hold my necktie down because it was flying,” he said. “I was a typical engineer. I didn’t like to speak to people. … I couldn’t say a word. And I realized if I was going to be successful not only in my career, but in life in general, I had to get over some of that.”

He also encouraged the students to find an area of the profession that they love.

“If you love what you do, you will never work a day in your life because it will always be a new challenge,” he said. “It will be something that lifts you up; something that challenges you to make you a better person and a better engineer.”

In closing, he commented, “I love civil engineering. I love the profession. I love the society. It was very good to me.”