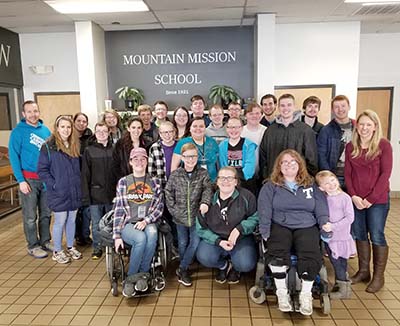 GRUNDY, Va. — For more than 200 at-risk students, the Mountain Mission School in Grundy, Virginia, offers an opportunity to begin a new life.

Over Spring Break, a group from Trine University’s Christian Campus House (CCH) did what they could to help those students on their way.

Twenty Trine students plus CCH lead campus minister Travis Wilhelm and his family traveled to the school to clean and perform grounds and maintenance work as well as teach, play and interact with the children there.

Students from around the world, ages preschool through high school, live at Mountain Mission School year-round, many escaping homelessness, poverty and violence. The school, founded in 1921, has cared for more than 20,000 children from 70 countries over its history.

More than 95 percent of the school’s graduates go on to college.

“Once I knew I was going on this trip, the story of the kids Travis and his family met in years past made me want to go more,” said Ashley Hale, a senior biomedical engineering major from Martinsville, Indiana.

Hale’s duties at the school included housekeeping tasks such as cleaning showers, washing windows, vacuuming, sanitizing toys and wiping down tables and chairs. Evenings included spending time with the children in the residence halls and going with them to jiu jitsu class, as well as hiking and playing dodgeball with her fellow CCH members.

She said one of her strongest memories was the first time a group of the CCH girls met the preschool and elementary school-aged girls for the first time.

“There was a cluster of people as the little girls gathered around to meet us, but after a little while, the cluster dissipated as the little girls would lead the mission trip girls away to go play in different spots,” she said. “At the end of this, I looked down and noticed a little girl was holding my hand. I didn't notice her holding my hand until that moment. She was a cute 3-year-old named Leah. From that point, she took me over to show me her room and to play with blocks.”

Mariah Lawrence, a sophomore elementary education major from Dunkirk, Indiana, was asked last summer if she would be interested in helping lead the trip.

“I prayed about the opportunity and said yes the next day,” she said. “I said yes because I thought it would be an overall wonderful experience, not only to grow my relationship with God by serving Him, but to see what this type of school was like.”

The trip gave Lawrence the opportunity to put her teaching skills into practice, working with a second-grade class for about three hours each morning, helping students with assignments. In the afternoon, she would assist with housekeeping tasks.

“There was always something to work on,” she said.

Lawrence said she was surprised at the impact the CCH group had on the children in their short time at the school.

“We were only there for four entire days, but I had children begging me to stay with them,” Lawrence said. “There was a little girl in the second grade class that I helped with. She and I formed a bond not only in the classroom, but outside of it as well. Her face would light up every time I walked into a room that she was in.”

She added that she would encourage anyone who has the opportunity to take a similar mission trip.

“They kept telling us at Mountain Mission School that by the time we left, our hearts would be changed and I can agree with that,” she said. “My heart has changed in the best ways.”

Photos: Top, Emily Clark, a junior biomedical engineering major from Forest, Ohio, eats with students from the Mountain Mission School during the Christian Campus House Spring Break mission trip. At right, 20 students from Trine University's Christian Campus House plus lead campus minister Travis Wilhelm and his family traveled to the Mountain Mission School in Grundy, Va., over Spring Break to clean and perform grounds and maintenance work as well as teach, play and interact with the children there.