LAS VEGAS — For the past eight years, a group of Delta Chi brothers have participated in an annual, informal Las Vegas reunion.

According to Tri-State alumnus and Delta Chi brother Trent Unterbrink 1998 BSME, “Our group of 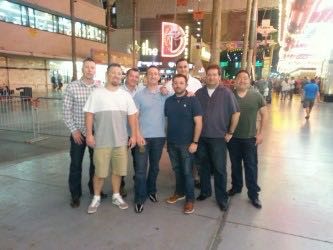 brothers from the late 1990s and early 2000s would always talk about how we shouldn’t let another year go by before we see each other or get together again. Someone would always say, ‘Let’s go to Vegas.’ Then another year would go by and nothing would happen. This went on for 10 years. Finally, in April 2010 we decided we would go to Vegas in March 2011.”

Alumnus Bryon Lewinski 1999 BSACC, who now serves as principal/controller of SmithGroup in Detroit, Michigan, describes the annual event as “just us guys getting together, watching sports, gambling and having a good time.”

The group also has taken multiple excursions to take part in activities such as shooting machine guns, watching Pen & Teller and the Blue Man Group, riding ATVs through the desert, and even meeting the CEO of The D (Derek Stevens). Some of the members have visited the shop from the well-known show “Pawn Stars,” and Unterbrink even got to meet Pete Rose.

This annual reunion is a special time for all the members. They not only get to catch up with old friends and reminisce about the good old memories, they also get to create more.  One of Lewinski’s most memorable moments happened the first time they began the tradition, watching the show at the Bellagio Fountains. As for Unterbrink, “one of our brothers actually got married at a Vegas chapel one year,” he said. “That was a great memory and something most of us never thought we would see.”

Although the group continues to change the establishment, the reunion is always held in Las Vegas, preferably on the Strip. The number of brothers varies yearly, but there are about eight consistent participants.

“It’s incredible that Trine/Tri-State as well as Delta Chi have had such an impact on our friendships and lives,” said Unterbrink, who now works on the management team of Cooper Tire’s Global Technical Center in Findlay, Ohio. He has been with Cooper Tire since he was a co-op student at Tri-State 23 years ago.