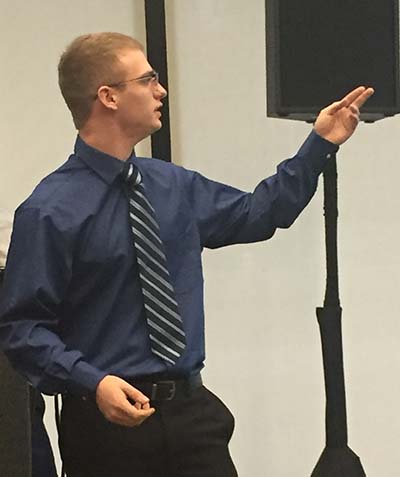 BALTIMORE — Two Trine University students gave a standing-room-only presentation in front of mathematicians from around the world and exhibited a research poster at the world’s largest mathematics meeting.

The Joint Mathematics Meetings (JMM), which attract more than 5,000 undergraduate, graduate student and faculty mathematicians, were held in Baltimore, Maryland, from Jan. 16-19.

Zach Hollis, a junior from Peru, Indiana, majoring in electrical engineering, and Dylan Kunce, a senior from Sturgis, Michigan, majoring in computer engineering, gave a talk during the first day of the conference titled “When Do You Call the Bullpen?” On the last day, they presented their poster, “A Model for Sequential Processes That Allow for Temporary Setbacks before Terminating” at the undergraduate poster session. The poster is under consideration to be recognized as an Outstanding Poster, although results have not been released.

Hollis and Kunce said they first heard about the opportunity from Daniel Dobbs, Ph.D., assistant professor of mathematics, who served as research advisor for their project.

“Once we realized we had a chance to give a talk alongside other mathematicians to a crowd of interested mathematicians we just had to submit our abstract,” said Kunce.

“Presenting at JMM was the big goal for the research project, and gave us something to work toward,” said Hollis.

They submitted abstracts to two organizing committees — Math and Sports, and Mathematical Association of America (MAA) Undergraduate Poster Session — in September, and were selected to speak based on their abstracts.

“When Do You Call the Bullpen?” drew more than 100 people. For the presentation, Hollis and Kunce developed a Markov chain — a mathematical system used in probability theory — to describe baseball from the point of view of a modern starting pitcher. Their chain uses the pitcher’s performance to determine the probability that a pitcher reaches a performance threshold in a given inning, such as five baserunners in an inning or nine baserunners in a game, and would thus be removed from the game.

The pair said they were surprised at the overwhelming response to their presentation.

“When it came time to give our talk and we were standing in front of about 100 people, the nerves really set in,” said Kunce. “It was incredibly flattering and humbling to see the many hands go up with questions at the conclusion of our talk. Not only did all of these people I had so much respect for give us their attention and the time to talk, they actually were genuinely interested in our project.”

“I certainly gained a lot of experience in public speaking, which far outweighs what I could have got in a classroom,” said Hollis. “It was really terrifying when, after our talk, all the hands shot up with questions. Being in the ‘hot seat’ is an experience I had zero expertise in. Fortunately, Dr. Dobbs gave us the tools we needed to answer as many questions as we could.”

Their poster project used excited random walks to model situations where a sequence of tasks needs to be completed and tasks can be attempted multiple times. A random walk is a process that describes a path consisting of random steps; in an excited random walk, the probability a future step will occur depends on the number of times it has happened previously.

Kunce said their poster also involved Markov chains and baseball, but offered more in-depth mathematics. The pair originally submitted their poster to Trine’s STEM Research and Design Symposium in December, winning in the Best Undergraduate Project category. They used feedback they received from Trine’s symposium to prepare for the JMM.

“Being judged on your knowledge of the subject is much more intense than we expected,” said Hollis. “It was amazing to be in a room full of undergraduates who have the same love of mathematics that I have, and we met a few people that really made the experience amazing. Overall it couldn’t have gone better.”

“Zach and Dylan did an outstanding job,” said Dobbs. “They worked really hard on their project and I couldn’t be more proud.”

“Our dedicated faculty in the Mathematics and Physics Department takes great pride in offering our best to our students. Being able to celebrate the accomplishments of our students is such a great feeling,” remarked Haseeb Kazi, Ph.D., chair of the Mathematics and Physics department. “Zach and Dylan’s achievement is just one example of how well our academic programs fulfill Trine’s mission of promoting intellectual and personal development, preparing our students to succeed, lead and serve.”