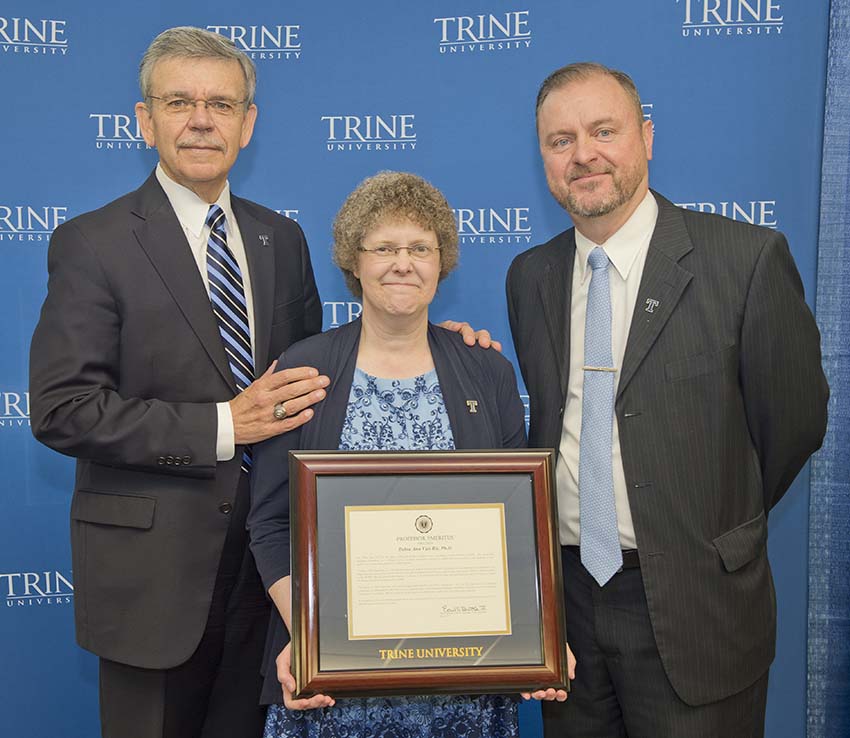 For Deb Van Rie, Ph.D., Angola was a stop on the Indiana Toll Road between her home in Mishawaka and graduate school at Bowling Green State University.

“Angola is approximately halfway between Mishawaka and Bowling Green,” she said. “In fact, the first time I visited Bowling Green, I stopped in Angola for dinner on the way back to Mishawaka.”

When she finished her Ph.D. in mathematics in 1991 and began looking for a teaching position, Tri-State University had an opening. What had been a stopping point became her focus for the next 28 years.

“Tri-State was the perfect fit for me, since the emphasis here is on teaching,” said Van Rie, who retired at the end of the spring 2019 semester. “I also liked the fact that Tri-State had so many students majoring in engineering, because that means they are strong in math and eager to learn.”

She enjoyed the opportunity to teach different math courses. Though her favorite courses are Abstract Algebra, Sets & Logic and Number Theory, she also enjoyed teaching Calculus I in the fall, followed by Calculus II in the spring.

“I could work with the new freshmen for an entire year,” she said.

She has served as academic advisor to math and math education majors for about the last 15 years, and appreciated that the Franks School of Education allowed her to do classroom observations for student teachers.

“I enjoy keeping in touch with (math and math education) students over the years after graduation,” she said.

Her favorite role at the university was serving as faculty athletic representative, which she began when the university joined the MIAA conference in 2002.  She said she has enjoyed working with both the Registrar’s Office and the Athletic Department, as well as seeing the increase in athletic facilities and sports offered at Trine.

“I am also a big fan of Trine University sports and have really loved attending games and matches throughout the years,” she said.

Her favorite memories from her time at Trine are of the people she has met and befriended here.

“The faculty in the math department from 1991 until 2019 have been great friends of mine. The students I taught and my many advisees have been wonderful,” she said. “Faculty from other departments who have served with me on committees or worked with me on other projects became my friends. Trine administrators and staff have welcomed me into their offices and made me feel part of the team. Needless to say, I will miss all of them.”

She is returning to Mishawaka for her retirement, with “no big plans except to relax and not have to grade any more exams.”