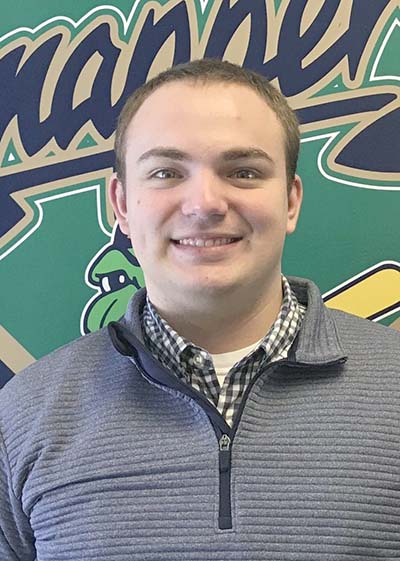 BELOIT, Wis. — Ben Vigliarolo has turned his longtime interest in baseball into a career.

After graduating from Trine University in 2018, Ben immediately went to work for the Beloit Snappers, a minor league baseball team in Beloit, Wisconsin. Currently Ben is marketing and media manager for the team.

“In a nutshell, I am responsible for creating material that is interesting to fans on a daily basis and actively interacting with people through community events and on game days in order to make our community better,” he added.

Ben acquired this position after interning with the Snappers his senior year, and was offered a full-time position after only a month. According to Ben, he strongly benefited from courses at Trine such as marketing, web content, public relations, communication and professional writing; each class helped him develop a wide array of skills he uses each day.

Currently he is reconstructing the Beloit Snappers website as well as constructing promotional content; he learned those skills in the Digital Advertising class.  Ben also has been using many different marketing strategies to create an efficient and effective marketing campaign; he learned these methods from Professor Carter Snider’s many marketing classes. Finally, Ben has been able to use what he learned from his communication classes to write press releases, create and maintain relationships within the community, and remain professional within his workplace.

On campus Ben was known for both his broadcasting and podcasting skillsets. He first became interested in broadcasting while working at the university’s radio station, WEAX. Ben began by working behind the scenes producing games, and eventually got time “on air”.

He also has a passion for the marketing side. Through an internship with the West Virginia Miners, Ben learned to make valuable connections as well as how to promote sports in different ways.

Through his marketing internship with the Miners, Ben discovered he would prefer working in an administrative position. He continued, “By working in marketing I can make a bigger impact on my community, but most importantly, affect fans and interact with fans on a more regular basis.”

Initially, Ben decided to attend Trine to play baseball and study broadcasting. “However, as time passed, I fully engulfed myself in my degree and pursuing my career goals” he said.

Ben’s long-term career goals are to be active within the community, and affect it in a positive way. He aspires to one day help create a unique, effective marketing strategy/brand. “If it were not for my classes at Trine, I would not be as well-rounded as I am today," he said.