Thomas lauds impact of those who give as Scholarship Gala raises $1.4 million 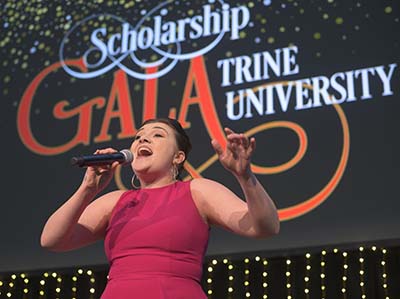 Generous people like those gathered for the 17th annual Trine University Scholarship Gala had a huge impact on Isiah Thomas.

The Gala raised about $1.4 million for Trine University student scholarships, including a $250,000 match for Books and Beyond scholarships from Trine board chair alumnus Dr. Rick L. James and his wife, Dr. Vicki L. James, and The James Foundation. More than 450 attended the Feb. 8 event.

During his address, Thomas recounted growing up as the youngest of nine children in an impoverished family on the west side of Chicago, and how the generosity of financial supporters allowed him to participate in youth basketball programs. He also mentioned the impact Bob Knight, Thomas’ coach at IU, had on him.

Knight and Thomas had reunited earlier in the day during a special ceremony at Indiana University marking the 40th anniversary of the IU’s national basketball championship. But Thomas said the gratitude shown to Knight was for far more than basketball.

“The outpouring of love that you saw us giving to Coach Knight today was a thank you and a we appreciate you coach for making sure that we did right when all of us wanted to do wrong,” Thomas said.

Thomas said speaking at the Scholarship Gala brought back many good memories of the support he received and reminded him how different his life would have been without them.

“There may be some kid that you’re going to help where he or she can literally grow up to change the world and you may not ever know it,” he said. “But he or she may stand up in a room like this and let everybody know that if it wasn’t for the charity, the compassion and the giving of a room like this, that person who has a chance to change the world wouldn’t be standing here.

“Tonight while we’re here, let’s make it happen for those who haven’t had a chance to experience the generosity that I’ve been fortunate enough to experience in my life; that totally changed my life and gave me an opportunity to be here in front of you. Let’s give some other kids and people a chance tonight.”

Guests enjoyed a gourmet dinner by Bon Appetit and live and silent auctions throughout the evening. The program closed with two songs by Lydia Tremaine, a Trine student who was the 2018 Miss Indiana.

Tremaine also noted the impact financial aid has had on her life.

“I come from an amazing family that loves me very much, but affording college was something they couldn’t offer me,” Tremaine said before performing her last song. “Because of the scholarship dollars provided by Trine University in partnership with the Miss Indiana organization, I will be graduating 100 percent debt-free from Trine University, which is such a blessing. I think this is such a testament to why we are here tonight. You’re providing students at Trine the opportunity to pursue their dreams without worrying about the financial burden.”

Since its inception, the Scholarship Gala has raised millions of dollars for Trine University student scholarships. Scholarship funds are a critical part of allowing students to attend Trine, which awarded more than $33 million in institutional aid in 2018-19.