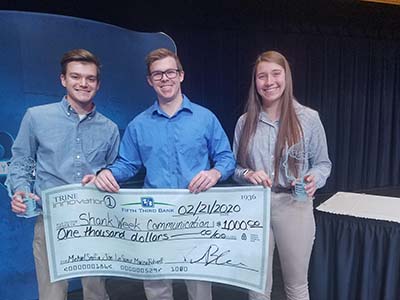 About 10 years ago, a stroke robbed Dr. John Shank of the ability to speak all but a few words. A group of Trine University students worked this year on an app to give him his voice back.

Biomedical engineering students Michael Scoffin, Joe LeSueur and Marisa Robinett, all seniors, developed the SHANK Week Communication App as part of their senior design project. They also entered the app in the university’s annual Innovation Challenge competition, winning second place and the People’s Choice Award for the technology portion of the college and community division.

The students coded the app for iOS, pairing emojis with common phrases. The app allows the iPhone to vocalize complex phrases as Shank uses the emojis.

According to the Centers for Disease Control, 795,000 people in the U.S. suffer a stroke each year, with 87% of those being ischemic strokes like Shank suffered. The group said the app also could help students who have learning disabilities related to communication.

The students hope in the future to develop versions for other mobile platforms, to add functionality while patients use the phone for the call, and to add the ability to output to a text message as opposed to audio.