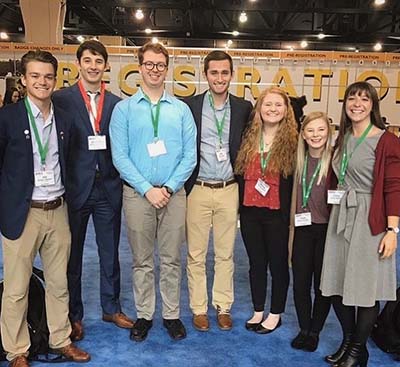 The 2019 meeting was held Oct. 16-19 in Philadelphia. The largest event for the biomedical engineering and bioengineering fields, it attracts more than 5,000 people each year.

Alexander Pessell, from Arcadia, Ohio, presented “Cross-linker Geometry Influence on Mucin-based Hydrogels,” which described a research experience for undergraduates (REU) he did in the summer of 2019.

The project combined various types of polyethylene glycol (PEG), used to form hydrogels, with bovine and porcine mucin (protein secretions that form the basis of mucus) to see which were the most effective at forming hydrogels with the properties needed to simulate mucus.

Joe LeSueur presented on “The Effect of Fatigue on Impact Accelerations in Ballet Dancers.” He also presented at Trine’s STEM Symposium, winning the People’s Choice Award.