Editor's note: The Elliotts' home was spared from fire damage, and they have since returned. 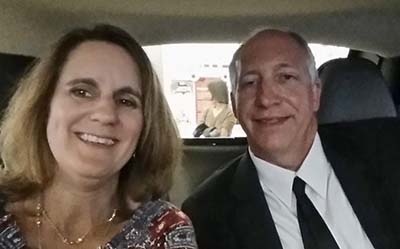 FELTON, Calif. — Bob Elliott said it was difficult going through his home, picking up some final items and making final preparations for an approaching forest fire.

“Seeing all the hopes and dreams we had,” he said. “In 24 hours it can go to a nightmare.”

The 1995 mechanical engineering graduate and his family evacuated early Thursday morning, Aug. 20, from their home in Felton, California, about seven miles from Monterey Bay. Wildfires now about a mile away, sparked by a freak thunderstorm the prior Sunday, have wreaked havoc on much of the area.

Bob and his family became aware of the storm about 1:30 a.m. that morning when lightning knocked out power to the home. Bob woke up because the CPAP machine he uses to treat sleep apnea shut off, and because the family dog – a Great Dane – was frightened.

“He jumped in bed with us and pushed us to the side,” Bob recalled. “It was kind of funny at the time.”

About 3 a.m., a roll cloud — a rare, low horizontal cloud formation — moved through the area, brining rain and 60 mph winds that snapped the tops off giant Redwood trees about a block away.

Lightning from the storm started 14 fires that joined together on Tuesday, Aug. 18. The next day, Bob was getting ready for a six-day trip to Nevada to explore abandoned mines and ghost towns, but awoke to find ash on the family’s cars from the approaching fires.

Instead of leaving for Nevada, the family began packing to evacuate.

“We had set up an emergency plan with what we would take if we needed to evacuate,” he said. “We packed boxes and put them by the door in case we had to leave overnight.”

When the text to evacuate came, the family packed their truck and SUV and towed two trailers behind, leaving the trailers at the home of a friend about 40 miles away.

They are currently staying with other friends who have an extra apartment in their house. 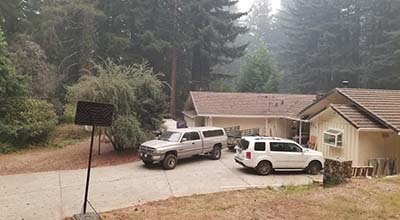 Bob later returned to the home to put as much water on the lawn as possible and take down a few trees, to try and limit fuel for the fire if it arrives. He is staying there, for now, to discourage looters.

An armed neighbor also has been patrolling the area. Several looters have been arrested.

The family moved to the home from nearby Santa Cruz in 2013. The two-acre lot offered plenty of room for the children to play, and had three routes into and out of town, plus two nearby fire stations.

It had been severely neglected when the family purchased it, but options were limited due to California’s housing crunch. Bob spent six months hauling brush and installed a concrete tile roof to make the property safe and livable.

He said the area’s climate sets up ideal conditions for a fire. Rain usually starts in late October or early November and lasts through the winter, causing vegetation to sprout in the spring.

About April or May the rain stops and won’t return until the fall, so the vegetation dries out. Needles from redwood trees, Bob said, are “like gasoline.”

“They have been dropping in some places for 50 or 60 years, and are three feet deep,” he said.

Firefighting efforts are complicated by very rugged terrain and the fact that many areas have never burned. In addition, he said, is that there is “tons of poison oak” in the area that goes airborne when it burns, which can result in hospitalization if inhaled.

“The firefighters are heroes. They know what they are going into,” he said.

He plans to be back in the office at Lockheed Martin on Monday, since he does not have the option of working remotely due to the classified nature of his aerospace engineering projects. In fact, some of the infrared imagery he has seen from the fire has come thanks to a sensor he aligned on a NOAA weather satellite.

“I’m getting data from a satellite I helped build,” he said.

There is no containment on the fire at this point, he said. It has already decimated the structures at nearby Big Basin Redwoods State Park, and Bob said a friend with 900 acres has lost his business, house and “everything.”

However, he remains hopeful that, with the preparations he has taken and the fire stations nearby, the family’s home will be spared.

“It’s in God’s hands,” he said. “I’ve done all I can. I just trust the Lord and pray He will protect our house.”

Top photo: Bob Elliott 1995 BSME and his wife Jill. Bottom photo: The family's home in Felton, California, is being threatened by a forest fire in the area.