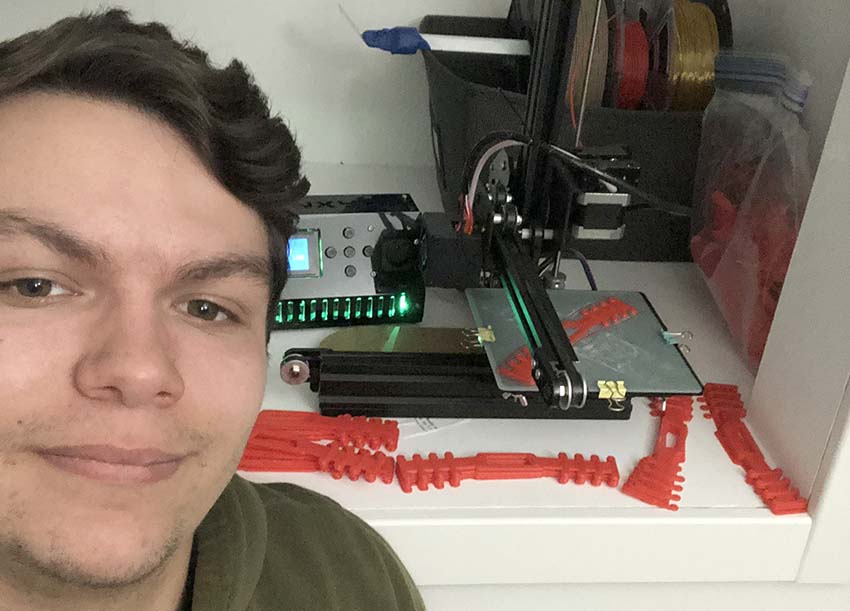 Evan Trusty has been interested in 3D modeling from a very young age. A new class at Trine University this spring allowed him not only to build on that interest, but to help others in the fight against the spread of the novel coronavirus.

Trusty, a sophomore design engineering technology (DET) major who lives in Angola, has been 3D printing face mask holders for area businesses using a 3D printer and knowledge he gained in the university’s Design for Additive Manufacturing class this past semester.

“This is an unfortunate time for so many people, and I want to use the resources I have to help anyone that needs it,” he said. “I feel blessed to be able to use my education in a very practical, helpful way.”

Evan’s father, Tom, has taught in Trine’s design engineering technology department for more than a decade, but Evan said his decision to major in DET came more out of his love for 3D modeling than a desire to follow in his dad’s footsteps.

“When I was really young, he showed me a couple of simple 3D modeling techniques and I was immediately hooked,” Evan said. “I have known since then that this major is what I want to do.”

Trine University added the course in Additive Manufacturing, which is industry nomenclature for 3D printing, this spring to provide students training in this growing field. Frank Luchini, assistant professor of design engineering technology, teaches the class and said that while 3D printing was unheard of in manufacturing 10 years ago, it’s becoming much more prevalent, particularly in the production of custom parts.

“You can do things that are impossible with other methods,” he said.

The Trine course was unique in that, instead of a textbook, students were given a 3D printer kit. They had one week to build the printer and were able to keep it once the class finished.

Equipping the students in this way had the unexpected benefit of making the transition easier when COVID-19 restrictions forced Trine to move to online learning mid-semester. Students were able to 3D print their projects at home and send files to Luchini so he could print them as well.

“By the end of it, we were designing a vacuum system for a community partner. The class performed rapid prototyping, going from initial concept to finished product in four weeks,” he said.

The class particularly appealed to Trusty, who said he had been 3D printing projects since he made a yo-yo in the fourth grade.

“Ever since then I have been learning more and more about additive manufacturing on my own, but I knew that this class would give me more formal education on the subject, and it really did!” he said.

He learned about optimal temperature and speed for 3D printer performance, and also that every printer is different.

“There will always be settings that need changed when using different printers,” he said.

Trusty got the idea for the face mask holders from a news story he read about a young boy who printed and donated them to his local hospital.

“I figured I would start doing it since I had the resources and experience,” he said. “I found the design on Thingiverse.com, a sharing website for files that can be loaded onto 3D printers.”

He can print about one mask holder every 30 minutes on his printer, and has made about 30 so far, which he has given to employees at the Angola Applebee’s, Walgreen’s and Indiana Marine Products, where he has an internship.

“One of the things we talked about in class was the ability of 3D printers to respond quickly to a need,” said Luchini. “Seeing our students use their engineering skills in community outreach to help those around them is awesome. That's what engineers do. We solve problems for people.”

Photo: Evan Trusty with the 3D printer he built in the Design for Additive Manufacturing class at Trine University, and face mask holders he has printed using the device.