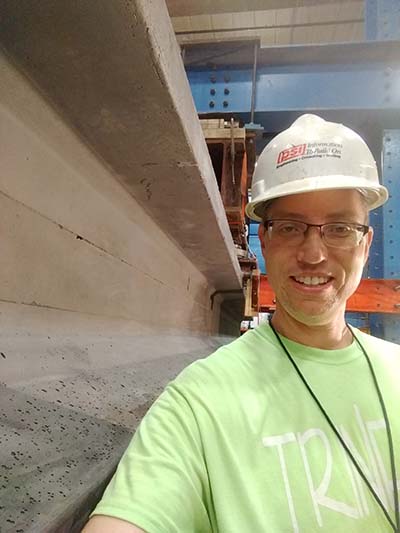 Gary Greene, Ph.D., associate professor in the Reiners Department of Civil and Environmental Engineering, was a visiting Senior Associate researcher at the Turner-Fairbank Highway Research Center (TFHRC) in McLean, Virginia, from May to August 2019. The research position was funded through the NRC Research Associateship Program and was the result of having his research proposal on the topic of shear performance of Ultra-High Performance Concrete (UHPC) bridge girders accepted by the agency.

While at TFHRC, Greene worked with a team of researchers in the structures lab who were developing the expertise necessary to design and construct concrete girders capable of spanning up to 300 feet. The project he was working on is known as the Ultra-Girder Project and utilized UHPC, a cutting-edge steel-fiber-reinforced concrete with an extremely high compressive strength and sustained tensile strength after cracking.

UHPC is gaining usage in the connections of precast concrete elements. Many of these applications have been in bridge construction. As a material, UHPC has an initial cost approximately ten times greater than traditional concrete. However, constructed UHPC members become more cost competitive because of the labor-saving construction techniques allowed by UHPC.

The Ultra-Girder Project is an initiative by the Federal Highway Administration (FHWA) at TFHRC to utilize the unique properties of UHPC to extend the current 200-foot span range of traditional concrete bridge girders to closer to 300 feet. The first phase of the project involves testing seven UHPC bridge girder specimens.

Greene’s role in the project included developing an experimental test setup capable of applying sufficient force to break a full-scale UHPC bridge girder. During the summer, the test setup was completed and the first two girders, which were 35 inches deep and 42 feet long, were tested and failed in shear as intended. A shear failure is observed by its large diagonal cracks that open up in the girder’s web.

In October 2019, Greene presented some of the team’s research finding at a session on UHPC during the American Concrete Institute’s national convention in Cincinnati, Ohio. His presentation, titled “Shear Performance of Pretensioned Prestressed UHPC Girders,” was well-attended. Collaborators on the presentation included Rafic El Helou, a contract researcher with Genex Systems at TFHRC, and Ben Graybeal with FHWA.

At right: Gary Greene, Ph.D., stands next to the UPHC girder. Greene developed an experimental test setup capable of applying sufficient force to break the girder. Eventually, such girders may be used to achieve spans of up to 300 feet for bridge girders.