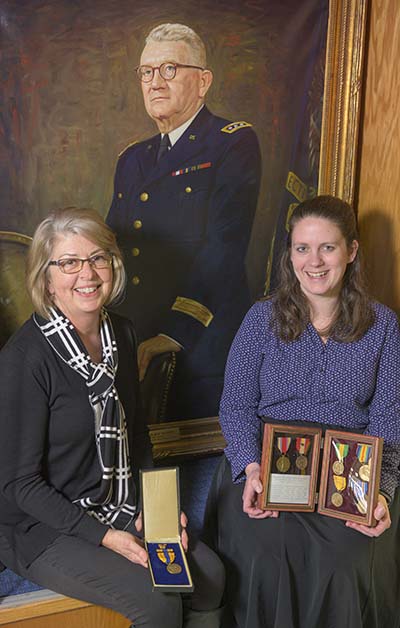 Trine University recently donated artifacts that were formerly part of its Gen. Lewis B. Hershey museum to the Indiana War Memorial Museum in Indianapolis.

The Hershey museum became part of Trine’s campus when Hershey donated personal artifacts to the university as he neared retirement. Hershey, a Steuben County native who graduated from what was then Tri-State College in 1914, went on to become head of the Selective Service System.

Hershey also was a longtime member of the Tri-State College Board of Trustees.

The museum was located in the Hershey Hall gymnasium. Some items later moved to the Perry T. Ford Library, which was renovated in 2015 as Ford Hall to house the Ketner School of Business. Many items were placed in storage, though a display case honoring Hershey remains in Hershey Hall.

In 2019, Trine University received a request from the Selective Service System national headquarters to return items that had been on indefinite loan to the Hershey museum. At that time, the university assembled a team consisting of retired professor Jim Zimmerman, retired human resources director Cathy Faye and retired executive assistant Dareen McClelland, to catalog and return the requested items. The team worked with direction from Jody Greer, vice president for finance.

Greer said the team decided to try to find a home for some of the other items and contacted the Indiana War Memorial Museum, which includes a Hershey display in its World War II museum. Jennifer Watson, collections manager for the museum, traveled to Trine on Feb. 24 to select artifacts for its exhibit.

“The Indiana War Memorial is excited and grateful to receive this collection of artifacts from Trine University related to such a prominent Hoosier veteran,” said Watson. “Our current exhibit only contains two items related to him, a dress jacket and a saber. These new items will help us tell a more complete story of his service as well as the Selective Service System during his tenure.”

Contractors from the Selective Service System picked up items Feb. 5 to transport back to Virginia, including Hershey’s desk and a saber, both of which were originally owned by World War I Selective Service chief Maj. Gen. Enoch H. Crowder; the table that held the National Lottery Bowl (which had been returned to the Philadelphia History Museum in 2017); and Selective Service posters, pamphlets, reports and photos.

The team continues to sort through remaining artifacts and hopes to find proper homes for historically significant items soon. Faye, an avid genealogist, located Hershey’s grandchildren and others with connections to him, and mailed some requested artifacts. Zimmerman completed archiving Hershey family papers, which are now located in the Trine University library, in January. Plaques, certificates and other artifacts awarded to Hershey by the American Legion and Boy Scouts of America are being returned to the appropriate post or chapter.

Hershey, who taught at local elementary schools and served as a school principal, enlisted in the Indiana National Guard in 1911 and received a direct commission as a second lieutenant in 1913. His guard unit was called to active duty on the Mexican border in 1916, and was sent to France with the American Expeditionary Force during World War I.

He became the longest-serving director in the history of the Selective Service System, holding the position until 1970. He retired from the Army as a four-star general in 1973 and died in Angola in 1977.

Photo: From left, Dareen McClelland, retired executive assistant at Trine University, and Jennifer Watson, collections manager for the Indiana War Memorial Museum in Indianapolis, hold artifacts from the display honoring Gen. Lewis B. Hershey in Hershey Hall on the Trine University campus. Hershey graduated from what was then Tri-State College in 1914 and was a longtime member of the college's Board of Trustees. The university recently donated artifacts that were formerly part of an on-campus museum honoring Hershey to the Indiana War Memorial Museum. (Photo by Dean Orewiler)