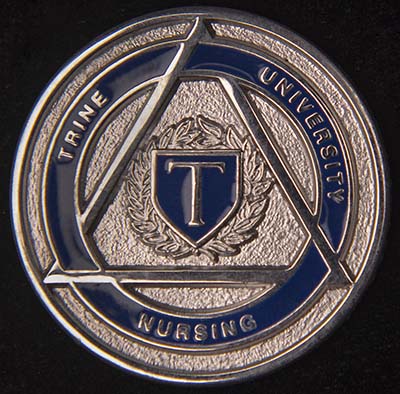 Trine University honored the first graduates of its RN-to-BSN program with a pinning ceremony held in Fabiani Theatre on Friday, Aug. 6.

Kristen Hake of Edon, Ohio, and Shannon Tew of Angola, Indiana, completed their Bachelor of Science in Nursing degree requirements at the end of the summer 2021. John Shannon, Ph.D., vice president for academic affairs, lauded the pair for being “pioneers.”

“Your focus, dedication and persistence are commendable,” Shannon remarked during the ceremony.

The pinning ceremony for nurses is a tradition dating back to the 1860s, when Florence Nightingale, considered the founder of modern nursing, was awarded the Red Cross of St. George in recognition of her service during the Crimean War. In turn, Nightingale presented a medal of excellence to her most outstanding graduates.

In the United States, the first nursing pins were awarded in 1880 at the Bellveue Hospital School of Nursing in New York City.