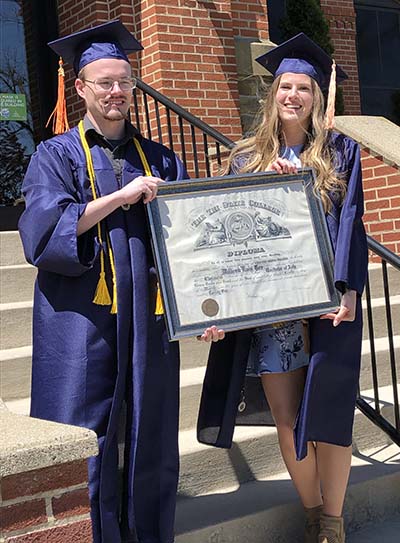 Somewhere, Mildred Gee had to be smiling.

Two of the 1921 Tri-State College graduate’s great-grandchildren participated in Trine University’s Commencement ceremony on May 8, exactly 100 years after Mildred earned her teaching degree.

Great-granddaughter Naomi Gollmer, a marketing major from Flat Rock, Indiana, was one of the members of Trine’s Class of 2020 who returned for the 2021 Commencement. Great-grandson Andrew Baughman of Rockford, Ohio, was a member of the Class of 2021, earning a degree in software engineering.

Family members took photos of both descendants with Mildred’s diploma, which had been passed down to Andrew’s mother.

“My mother received Mildred’s diploma several years ago from Mildred’s oldest son Harold, my mother’s uncle, since my dad went to Tri-State and my brother was currently attending,” he said.

“When she was attending college, it was at a time when women did not really go to school, and if they did, they were very limited on what they could do,” Naomi said.

After graduating from Tri-State, Mildred had a long career teaching high school in Hicksville, Ohio. Naomi said several of her family members went through Mildred’s classroom.

Naomi first heard about her great-grandmother when she applied to attend Trine.

“I told my mom I was applying and she remembered my great-grandma had gone there,” she said. “Once I found out that my great-grandma had graduated from Tri-State, it helped solidify my decision to attend Trine. I thought it was really interesting that she was able to go to college in the first place, and that I would be graduating almost 100 years after she did.” 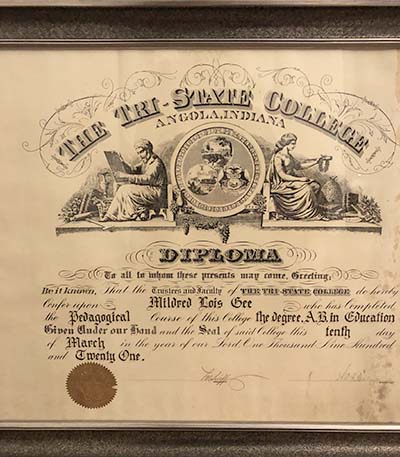 The family connections that influenced Andrew to attend Trine were a bit closer: His father Jack earned a mechanical engineering degree from Tri-State in 1995 and his brother Daniel graduated with a computer engineering degree in 2017. He did not hear about Mildred until this past Christmas, when his mother mentioned wanting to take pictures with her diploma.

Besides graduating from the same university, Mildred, Naomi and Andrew share at least one other commonality: They all attended during a time of pandemic. Mildred contracted the Spanish flu while at Tri-State and had to leave school to recover, while Andrew had to quarantine for two weeks after getting COVID-19.

Naomi’s original Commencement ceremony was postponed due to the pandemic.

“It's funny how it worked out, since technically I graduated 99 years after she did, but my Commencement still took place 100 years after she graduated,” she said. “It really felt like it was meant to happen that way, and I was still able to reunite with Andrew and some other family members during Commencement.”

“It's hard to wrap my head around that we went through a similar situation while at the same place. I'm sure our experiences were very different, but it is interesting to know that there were more similarities than I probably could have imagined when I first started at Trine my freshman year.”

Top: This photo from the Trine University archives shows students enrolled in teaching classes in 1919. Mildred Gee was part of the group and graduated in 1921. Two of her great-grandchildren received their degrees at Trine University’s 2021 Commencement.

Top right: Andrew Baughman, left, and Naomi Gollmer hold their great-grandmother Mildred Gee’s diploma on the steps of Sponsel Administration Building on the Trine University campus following the university’s Commencement on May 8. Andrew and Naomi received their Trine degrees a century after Mildred received hers from Tri-State College, Trine’s predecessor.

Bottom right: A close-up of Mildred Gee’s diploma, awarded by Tri-State College in 1921.