This year’s Trine University combat robot team faced a difficult choice: whether to take their senior design project to the competition it was designed for, or participate in Commencement.

The team found out the National Robotics Challenge (NRC) was scheduled for May 8, the same day as Commencement, about a month before both events were scheduled to occur.

“We were really conflicted,” said Devin Britt, a mechanical engineering major from Millersburg, Ohio, who was part of the team. “We really wanted to see our senior design project through to the end, but we had worked hard for four years to graduate. My parents were coming to Commencement.”

That team, made up of mechanical engineering majors Ismar Chew of Indianapolis, Tim Mayer of Endicott, New York, and Trevor Ransbury of Medina, Ohio, finished third in the NRC’s collegiate division for combat robots.

This is the second time Trine University has sent a team to the combat robot competition, which involves building robots to go head-to-head with the goal of destroying or disabling its competitor. Held in Marion, Ohio, the annual challenge offers multiple competitions for different types of robots.

Like all senior design projects, the work on Trine’s combat robot began in the fall. Working within requirements provided by the NRC and developing specifications based on elements of other robots that had succeeded in the competition, the team designed a complete robot in CAD and determined the necessary requirements to power its electrical components.

The group designed a high-speed drum with spikes around its circumference, placed on the robot’s front to cut into competitors and shred any armor or exposed electronics.

In the spring semester, the team manufactured all the necessary components and constructed the robot.

During the first stage of competition, each team submitted a video of their robot, demonstrating that it met the competition requirements as well as showing how it worked. The NRC determined the top eight teams from the videos to compete at the national event.

After the Trine robot advanced to the national competition in early April, faculty advisor John Liu, Ph.D., reached out to juniors to see who wanted to carry the project forward.

“Tim, Ismar and I all wanted to participate, so we made a team,” said Ransbury.

The juniors were quickly added to email discussion and attended weekly senior design meetings to learn about the robot and the competition.

“The day before the competition, we broke down the entire robot and showed them the controls, how it went together and where everything went,” said Britt.

The extra instruction proved to be necessary, as Ransbury said getting the robot through inspection was a complicated process.

“We spent most of the competition troubleshooting problems, but we worked well together,” he said.

Despite not being able to personally compete, Britt said he was pleased with how the replacement team and the robot performed.

“I’m really happy to see what they did well and represented Trine well,” he said. “I wish we would have won, but third was very good.” 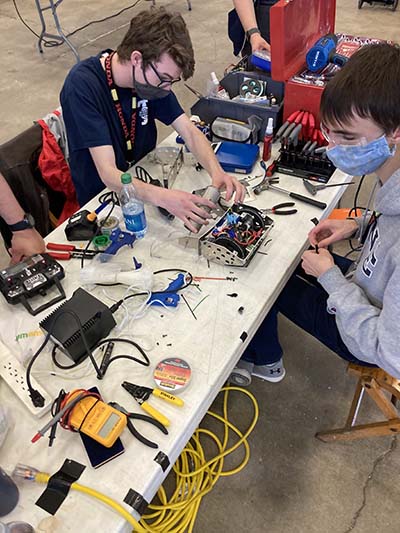