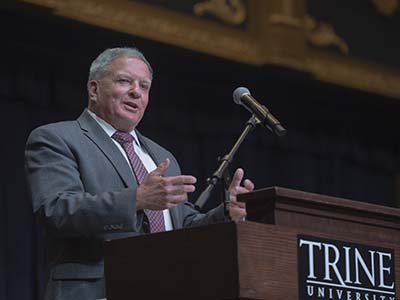 “For today you and I are gathered together as free people, living in a country that despite all its flaws remains the light, hope and envy of the world,” he said.

The event, held Sept. 10 in the T. Furth Center for Performing Arts, marked 20 years since the 9/11 attacks –7,304 days, Trine University President Earl D. Brooks II, Ph.D., noted in welcoming students, employees and members of the public to the event.

“But even in the midst of unparalleled destruction and violence, the days and months after 9/11 showed an incredible resilience, courage and strength of the American people, and it’s in this spirit that we join here together today,” Brooks said.

Brooks recognized veterans, active members of armed services and emergency and first responders present before introducing Tooley, who had a more-than-40-year career in the US Army and today serves as president of defense development for the Indiana Economic Development Corporation.

Though 9/11 caused 2,977 deaths, more than 6,000 injuries and more than $2 trillion in economic damage — in addition to inspiring subsequent terrorist activities — Tooley said it only damaged the pillars, not the foundation of the United States.

“To me 9/11 was not just a tragic, infamous event occurring at a moment in time, but also a mile marker on our journey as a free people, a point at which we were reminded that freedom is a unique blessing gifted to us, a blessing not to be taken for granted,” he said.

“It is a reminder that the cost of freedom is steep, paid for with the lives of 2,977 of our fellow freedom sojourners on 9/11, thousands in the 20 years since, and most recently by 13 young service members defending the gate at the Kabul Airport as they were evacuating Afghan refugees.”

He added that 9/11 is also a reminder of the importance of preparing the next generation of leaders, entrusted to institutions such as Trine University.

“The task is to equip everyone with the skills they require to exercise the elements of national power wisely and judiciously when they assume the mantle of leadership, but more importantly, helping them to understand and incorporate into their core being the values and virtues that define us as a people and them as a person,” he said.

During a question-and-answer session that followed his address, Tooley told students the core values that bind us together will get them through challenges in life.

“You are our nation’s treasure,” he said. “Never take lightly what you bring to the table and never discount it. If you continue the path you’re on, you will experience great success and our nation will rest in great hands.”