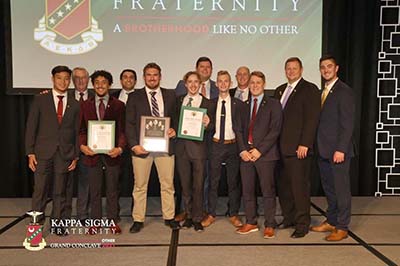 The Kappa Sigma chapter at Trine University has been awarded a Kappa Sigma Founders’ Award of Chapter Excellence as one of the fraternity’s top chapters in North America.

The Founders' Award of Chapter Excellence (FACE) is the benchmark award in the Kappa Sigma Fraternity, recognizing outstanding chapter management, achievement and program development in all areas of operation. Only 31 chapters received the FACE award within Kappa Sigma in 2021.

“Receiving this award is a great distinction for our chapter here at Trine, since only 10 % of 290 chapters were able to receive it,” said Ben Alston, president of Trine’s Kappa Sigma chapter. “It shows how diligent our members can be to set a goal and obtain it. I am beyond proud and happy for all of our current active brothers and alumni who helped us along the way.”

“This recognition shows not only the strength of the Trine chapter of Kappa Sigma, but also the strength of our university,” said Marek Kolar, Ph.D., faculty advisor. “Thanks to our focus on residential life, and on development of skills such as leadership and communication on Trine campus, our brothers were able to stand out while competing at a national level against chapters from much larger universities.”

“Kappa Sigma is North America’s largest college social fraternity. We pledge more men and have more undergraduate members than any other fraternity, and we give more time in community service and more money to charitable causes than any other fraternity. Winning a Founders’ Award of Chapter Excellence means that our chapter at Trine University is not just one of the best chapters in Kappa Sigma, but is one of the best fraternity chapters on any college campus in North America,” said Worthy Grand Master Adam J. Merillat, president of Kappa Sigma’s International Board of Directors.

Kappa Sigma’s Theta-Xi Chapter at Trine University and its 49 members had the following achievements during its award-winning 2020-2021 academic year:

Kappa Sigma is the largest college social fraternity in the world with more than 200,000 living members, including over 17,000 undergraduates and 300 chapters and colonies located throughout the United States and Canada. Founded in 1869 at the University of Virginia, Kappa Sigma International Headquarters is based in Charlottesville, Virginia.