Trine’s Amateur Radio Club back on the air 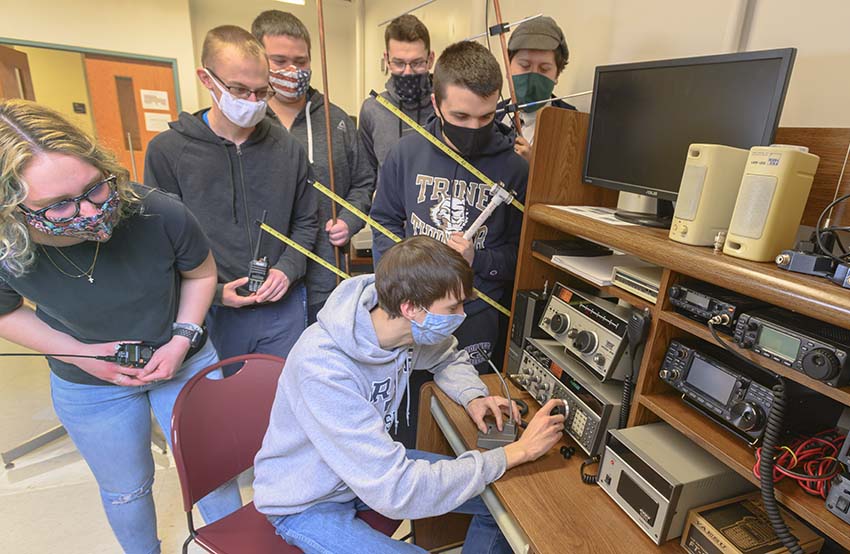 Though the COVID-19 pandemic has limited student travel at Trine University this year, members of the university’s Amateur Radio Club have still been able to make contacts around the world with their radios.

Since its rebirth last year thanks to the generosity of Bill Becher, Ph.D., a 1950 Tri-State College radio engineering graduate, and his wife, Helen, members of the club have communicated with amateur radio enthusiasts, known as hams, as far away as Europe and South America, as well as people across the United States.

Last semester, the club finished setting up its long-distance shortwave radio communication station inside Fawick Hall and built an antenna on the roof of the building. This semester, the club has continued building antennas, including handheld versions members used to participate in a fox hunt, an event where hams try to locate a transmitter placed in a location for people to find, in Fort Wayne.

The club also hosts a weekly Net, an opportunity for members and area hams to chat via radio.

“We’re all very excited about these events and plan to keep getting involved in more, like satellite communication or bouncing signals off the moon,” said club president Tim Mayer, a mechanical engineering major.

Trine University had not offered an amateur radio organization for some time when Bill and Helen Becher donated all their equipment and gave financial support to re-establish the club.

“Without them, it wouldn’t have been possible to start and continue,” said Woolverton.

Bill’s love for radio goes back to his childhood in the late 1930s, when he and a friend used flashlights to send Morse Code messages between their homes. Later, a friend suggested they build a spark-gap transmitter from a schematic he was given by one of his teachers. Although they finished it, it was never connected to an antenna, since spark-gap transmitters had been prohibited due to the interference they caused with home radios.

Bill continued to study, attended the government required Morse Code class and built many radio-theory projects, until amateur radio was prohibited during World War II and radio components almost impossible to find and purchase. He continued to read and study radio theory and enrolled at Tri-State College, where he was a member of the Radio Club and played with war surplus radios and parts.

He said he chose Tri-State because he thought it was the only school that offered radio engineering.

“All the other schools I was aware of, advertised only electrical engineering programs,” he said. “I didn’t realize they taught the same subjects, the only difference being Tri-State had a few radio classes in their program.”

Though he didn’t use his radio education professionally after graduating from Tri-State, Bill’s love for radio never faded. After he retired in the early 1990s, he and Helen studied for and obtained their ham licenses and pursued the hobby until two years ago, when the retirement community they moved into did not permit antennas needed to continue.

Bill has remained connected to Trine University since he graduated, serving on the Electrical and Computer Engineering Industrial Advisory Board, and so the couple gave their equipment to the university.

The amateur radio club in Michigan suggested that he and Helen help with Trine’s club.

“Ham radio is good thing to have in school,” he said. “It gives you lots of practical experience and you come out of school running and having a background that isn’t just reading books and doing lab experiments.”

Woolverton said the reborn club’s main objective is to allow members to learn and practice ham radio skills, both how to communicate with others and making sure the equipment works optimally.

Mayer, whose grandfather was an amateur radio operator, said he always had an interest in radio, but got hooked once he joined the club at Trine.

“The amateur radio community is wonderful to get involved in,” he said. “Everyone you meet over-the-air or in person is always excited to share their hobby with a younger generation, and share tips and stories about how they set up their stations or built antennas.”

Tuholski said club members gain confidence from learning to build transmitters and speaking on the air.

“I've really enjoyed the process of learning how to properly transmit and communicate via the radio,” he said. “Seeing both myself and other club members go from being very unsure of how to talk on the air to now where we frequently use the radio just to talk, has been awesome.”

In addition to introducing members to a fun, lifelong hobby, Mayer said, ham radio provides an advantage when interviewing for jobs.

“Several members mentioned they were a licensed ham operator during an interview, and discovered that the person they were interviewing with was also a licensed amateur,” the mechanical engineering major said. “In terms of resume boosters, I think it shows a real interest in electronics, above just what you might learn in class.”

“In disasters, when communication go out, ham radio operators are many times used as the lines of communication and to provide support,” he said.

The club currently has enough handheld radios, operating at five watts and covering the VHF and UHF frequency bands, for each member to check one out for the semester. It also has high-frequency radios, one of which is a software-defined radio connected to the antenna on the roof that allows the club to send and receive signals from long distances.

Becher noted that hams constantly buy new equipment as technology updates, and that Trine’s club is a good destination for older equipment.

“You buy these things all the time as a ham, and then the other thing becomes something you no longer need,” he said, noting that college clubs can either re-use the equipment or sell it at an amateur radio event.

Anyone who would like to support Trine’s Amateur Radio Club through monetary or equipment donations can contact Woolverton at woolvertonk@trine.edu.

“As we expand our arsenal of equipment, we can start to participate in more and more amateur radio activities,” Mayer, the club president, said.