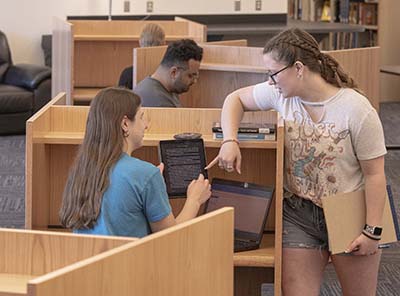 A $19,000 grant from the Indiana State Library has provided computer equipment, study carrels and increased access to scholarly databases for Trine University library facilities in Angola and Fort Wayne.

The project, titled, “Removing Barriers to Equitable Access to Core Resources in Support of Higher Learning,” included the study spaces on the second floor of the LINK in Angola, increased library database access for the university’s Science Department, and circulating laptops for the library at Trine’s Health Sciences Education Center in Fort Wayne.

“This grant was a timely opportunity to provide Trine students better access to science research databases, laptops and much-needed study spaces, all of which have been well-used,” said Jill Noyes, director of library and information services at Trine.

The Indiana State Library received more than $3.4 million as part of the American Rescue Plan Act (ARPA) to support libraries and library services across the state. The State Library used a majority of these funds to disburse sub-grants of $5,000 to $100,000 to eligible Indiana public and academic libraries.

Photo: Trine University students use new study carrels on the second floor of the LINK library on Trine's Angola campus. The carrels were part of a project funded by a $19,000 grant from the Indiana State Library. (Photo by Dean Orewiler)