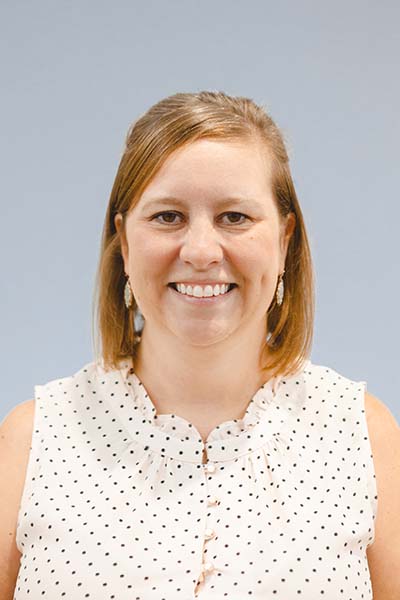 Though her career journey has been far different from what she intended as a student at Tri-State (now Trine) University, Alexandrea Hanba’s path has led her to become recognized as one of the top women leaders in her state.

The 2005 English education graduate was recently named one of 2022’s Top 50 Women Leaders of Illinois by Women We Admire, a website providing news and information on women leaders.

Awardees are women whose accomplishments and diverse backgrounds have contributed to the success of industries including academia, financial services, travel, healthcare and information technology, according to the organization.

Alexandrea serves as vice president of people for Stacked Finance, a financial advisor that assists clients with cryptocurrency investing. In her role, she works to balance and align the interests of leadership, staff and the organization to provide a comprehensive human resource strategy.

“I was so honored to be named as on the top 50 women leaders in Illinois,” she said. “It is such a humbling and rewarding experience to be recognized for the work I do. I am so passionate about supporting the colleagues I work with every day.”

Her current role is a big departure from her original plans to teach middle and high school students. The alternate career path opened up when she moved to Chicago to be with her boyfriend (now husband), Craig, a 2003 Trine graduate.

“I was interviewing for teaching positions, but also needed money, so I took a job as legal assistant at a law firm,” she said. “That led to an interest in a legal career, so I attended Loyola University and earned my paralegal certificate.”

She then worked at a different law firm as a paralegal office manager, and “became really enthralled with the people aspect of the job.” She then took a human resources role at a financial organization and has continued to advance in that field.

“As a college student, you don’t always know and understand the jobs available to you,” she said. “When I moved to Chicago, I learned there are so many opportunities and paths to take. I loved working with people and helping/supporting them. HR became a place that I could do that, and I felt like I was making an impact in people’s lives.”

Though she is in a different field, she has been able to apply many of the concepts she learned at Trine to her work.

“As a teacher, you need to be prepared not just for the lessons you are going to teach but for many kinds of situations with your students, parents and fellow educators,” she said. “I use those tools every day in preparing for presentations, implementing new projects and having conversations with managers and other colleagues.”

“I also was pushed really hard by the English professors at TSU. It was rough, but I persevered through those assignments and that has really helped me understand that even though things are hard or may not seem doable, there’s always a way to work through them. I appreciate those professors more than they will ever know.”

“I also can’t go without saying that TSU also gave me life-long friendships and an amazingly supportive husband,” she said. “It was an amazing college experience and education that set me up to be successful.”