MARION, Ohio — One was a gladiator, the other a mouse. Both were winners.

Another Trine team took first place out of 10 college and university entries in the Micromouse contest, where robots were designed to be the first to reach the center of a maze.

The Trine combat robot won all six matches it competed in over a two-day period, with only one match going to a judges’ decision. Team members were mechanical engineering seniors Connor Brentlinger of Granger, Indiana; Dylan Keating of Decatur, Indiana; Daniel Shivley of Churubusco, Indiana; and Alex Walters of Mishawaka, Indiana.

The Trine design, dubbed Determind, was a spinner that encapsulated the entire robot. It was made almost entirely out of polycarbonate, allowing it to absorb impacts without being permanently deformed.

“This design because has the potential of outputting a lot of power. At the same time, it didn’t have a weak spot,” said Brentlinger. “This combo gave us an advantage against most other robots.”

Brentlinger said the team worked for multiple hours “just about every day,” designing the robot with no other guidance than the competition rules.

“We went through many iterations of the weapon,” he said. “Since it is the part of the robot that absorbs all the impact, it was the most difficult to design.”

Micromouse team members said they were attracted to the competition because the technology has applications to self-driving cars. They began their design by examining the constraints of the competition and used those parameters to determine the size of the motor and the speed of the mouse’s sensors and microcontroller.

“If there was any sort of intersection or an opening, the sensors would be able to detect it and make a decision,” Niccum said. “If there was more than one, we had it generate a random number to choose a direction. This got us into dead ends a lot, but we didn’t have time to do anything more complicated.” 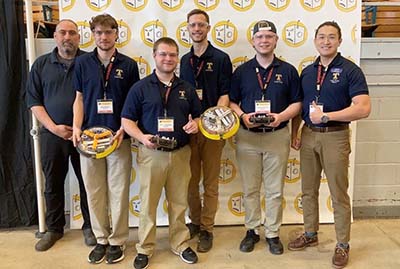 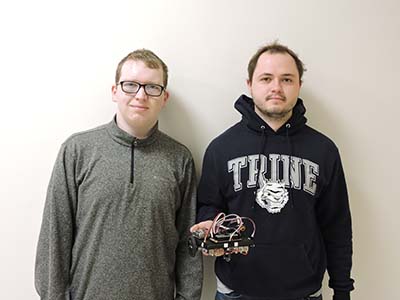