Their cup runneth over. Or at least, their storage tanks do.

For five years, teams from Trine University’s student chapter of Engineers Without Borders (EWB) have worked in tandem with the Indianapolis professional chapter of EWB to increase the amount and quality of drinking water for the community of Comuna Guangaje, a remote village in Ecuador.

The most recent Trine team to visit, in October 2022, found the efforts have exceeded expectations.

“We were originally expecting much less water than what was actually there. Some of their storage tanks were even overflowing!”

Prior to the work by EWB and the Trine teams, community members, about 400 indigenous people, often had to carry water from a distance, especially during Ecuador’s dry season.

In 2017 and 2018, Trine student teams visited the village to survey its water system and recommend possible improvements. In March 2020, a group of Trine students helped construct two long French drain systems to increase the capture of groundwater into storage tanks.

The 2022 team traveled to the community to evaluate the long-term success of the 2020 trip’s construction. In addition to Kennelly, that group included Arizona Lenski, a senior from Merrillville, Indiana, majoring in civil engineering, and Madison Ruen, a sophomore from Antwerp, Ohio, majoring in chemical engineering.

Tim Tyler, Ph.D., professor in the Reiners Department of Civil and Environmental Engineering and EWB advisor, also was part of the team, as he had been for the prior trips. Overall, 15 Trine students and Tyler have visited the community over the past five years in order to improve the drinking water system. 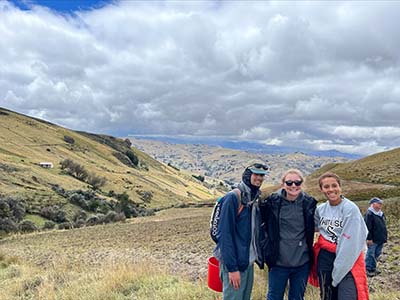 Ruen said that, from a young age, she wanted to travel to another country to help out. It was an easy decision for her to make the trip to Ecuador.

Unlike some prior groups, Kennelly said he had a good idea of what to expect when he arrived at the village, thanks to plenty of photos and maps from previous trips. However, the photos did not convey how steep the terrain is, something that became especially apparent during a hike into the Quilotoa caldera at the end of the trip.

“The hike into the caldera was easy, as it was all downhill,” he recalled, “but going up was quite tough! I climbed roughly 1,200 feet of elevation in only one mile. The entire time I was kicking myself for not renting a donkey to take me up.”

Ruen noted that the village’s homes and buildings were very spread out, but that residents still maintained close relationships.

“The members of the community at times had to walk miles to get where they needed to be, and even though they were so spread apart, it became apparent that everyone knew everyone,” she said.

While in Comuna Guangaje, the Trine team measured the flow rate of the village’s drinking water catchments. They also spoke, through translators, with village leaders and residents about the new water system, learning that the village no longer has to ration water.

“We were able to confirm that the water flow to the community had drastically increased,” Ruen said.

The group also took GPS coordinates of the village’s irrigation system for a possible future project that would allow residents to have more productive farming seasons.

Besides their work and taking hikes, students also got the opportunity to learn more about life in the village. Kennelly particularly enjoyed the final meal with community members, a chicken and potato stew, while Ruen and Lenski got to make homemade cheese with one of the workers at the inn where the group stayed.

“I was unsure of what to expect going into the trip; it was my first time out of the country,” said Ruen. “The whole experience was very eye-opening to me. I was able to better understand the conditions the people of Comuna Guangaje were living under as well as see the beauty of Ecuador.”