In the most magical place in the world, Trine University student Kelsey Lounds got to make magic.

“Each day I have six to thirteen hours where I can create magic for the guest,” she said. “It all depends on how hard you are willing to work.” 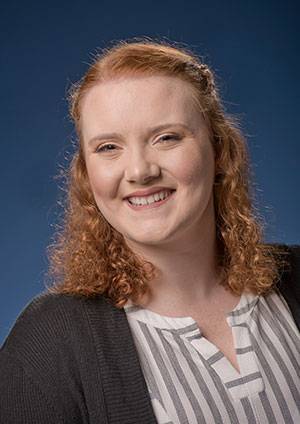 Lounds, majoring in accounting from Waterloo, Indiana, spent the fall semester of her junior year in Lake Buena Vista, Florida, working at Walt Disney World as part of the Disney College Program. The five- to seven-month-program offers college students the opportunity to work in Disney parks and resorts while living in company-sponsored housing and participating in personal and career development classes.

Lounds said she first heard about the program from high school classmates who had completed the program and eventually wound up working full-time at Disney.

“I applied because I thought working for a company like Disney would really be able to make me stand out from competitors in future interviews,” she said. “I knew I would learn so many things while working for such a big, successful company.”

She completed an initial application and a web-based interview to qualify for a phone interview. A few weeks after the phone interview, she was notified she was accepted into the program.

She served her internship in Quick-Service Food and Beverage at Disney World, working in any of the resort’s quick service restaurants.

“Something I like about my role is that each day looks different,” she said. “There are about 15 different positions I could get, and I will have five to ten a day. A lot of my job includes customer interaction, and all of my tasks revolve around making the guest happy.”

One of her favorite experiences was assisting a family that was deaf.

“They were having a hard time finding a table,” she said. “I helped them find a table and they were so grateful. I decided to get multiple desserts and I wrote them a note and brought it to their table. They were so surprised and they all gave me hugs. It was something I will always remember.”

"I applied because I thought working for a company like Disney would really be able to make me stand out from competitors in future interviews. I knew I would learn so many things while working for such a big, successful company."- Kelsey Lounds

She took a collegiate Organizational Leadership course and a seminar through Disney while she was in the program, with time off from work scheduled during classes.

“I do find it challenging to balance school and work,” she said. “I discipline myself to stay home and work on homework instead of running around the parks.”

“I had the option of extending until June of next year, but decided I better finish school,” she said.

She plans to complete one more College Program session after she graduates and then hopes to complete a Professional Internship through Disney more related to her major.

“Even if I don’t choose to stay with the Walt Disney Company, this will provide many talking points during future interviews and truly set me apart because of the experience and knowledge I have gained,” she said.