Dr. Stephen White, who works as an optometrists in Angola, speaks using a handsfree device in a stoma in his throat. However, he found he had issues with the device falling out, and it was inconvenient to have to push the device in order to talk. He worked on a band to try and keep the device in place, and his nephew designed an improved version for him to use. Dr. White reached out to Innovation One to try to get the band printed on the facility’s 3-D printers.

In turn, Jason Blume, executive director of Innovation One, reached out to Maria Gerschutz, Ph.D., chair of Trine’s Biomedical Engineering Department, to see if Trine students could improve on his current design. Gershutz gave the project to sophomores Austin Crouse and Nathan Kell, along with freshman Syndey Schlafer. Improvements to the original design included making a flap on the front of the band removable, enabling White to use the band with both the hands-free device and the heat moisture environment (HME) he uses in its place when he doesn’t need to talk. The students also devised a new way to get the band around his neck so that the band didn’t break, as previous versions had done.

Nick Santino, a 1965 grad of Tri-State, now Trine, and owner of Swimming Reaction Lights, LLC, first approached i1 last year seeking assistance with the design and engineering of a new product to better serve the needs of the competitive swimming industry, specifically the deaf or hard of hearing swimmer. The lights are used as a starting device to signal swimmers during competition, enabling them to focus on a light mounted beneath their stand instead of straining to listen for a buzzer.

Trine student Nathaniel Scroggins, an i1 intern, refined the original prototype and re-engineered the lights to improve the aesthetics and functionality of the product while lowering production costs. As a result of the new partnership, Swimming Reaction Lights, LLC, moved its production from Newark, N.Y., to Trine’s main campus and Scroggins, a senior majoring in design engineering technology, has assumed responsibility for operating the startup business. 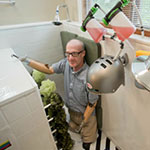 A hands-free, automatic shower system developed by Trine University's Innovation One and a team of engineering students has improved a Fort Wayne man's quality of life.

The shower features areas to rinse, shampoo hair, wash the body and be dried. Water temperature and pressure are controlled so it can safely be turned on and off. The unit is divided into stations that wash various parts of the body progressively.

The hair-washing station gently scrubs the scalp and a pre-set amount of shampoo flows out when the station is activated.

The body-washing area has a series of replaceable synthetic mesh loofahs that are automatically actuated. Water comes from above and below and liquid soap is delivered by spray. The area facing the scrubbers is padded for safety.

The drying area features warm air and uses less energy than would be used to wash and dry towels. 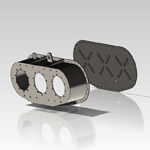 Deister approached us for help with the redesign of a gear cover for an aggregate shaker screen. Deister needed to lower the weight and cost of the gear cover. The design had to have infinite fatigue life, withstand 8Gs at 800 RPMs, and could not be cast.

The team researched several concepts, set the product specifications, designed and analyzed the gear cover utilizing SolidWorks 3D modeling software and built the prototype. The team identified a solution that met and in some cases even exceeded Deister′s requirements. 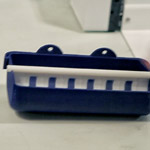 The time has come for a new implementation of ice making. Dometic presented the idea to engineer innovative ice–making concepts.

Dometic Industries is a worldwide supplier of high–quality and innovative products for the RV and Marine industries. The current ice–making process, in which ice is made by using only the absorption refrigeration process, is inefficient, producing only 3 to 4 pounds of ice in 24 hours, the current RV refrigerating ice makers do not supply travelers with the amount of ice they need daily.

The team researched various concepts, set specifications, performance designs and analysis using SolidWorks 3D modeling and analysis software to redesign the ice maker concept. Prototypers were built to prove out the design. The redesign of the ice maker is projected to allow consumers to produce approximately 20 to 28 pounds of ice in refrigerator and close to 30 pounds in a stand–alone ice maker drawer in a 24 hour period, which raises the productivity level of ice making approximately by 15 percent. The innovative ice makers will be placed in the current Dometic commercial vehicles. The drawer will allow an alternative way to retrieve ice and is projected to be placed underneath the counter in a Marine Cruiser, RV and ultimately households.

The current propellant fill/drain valves used on many types of spacecraft are difficult to service after testing. Numerous issues have occurred when trying to service such valves that have caused serious injuries and deaths because of leakage of highly volatile and toxic propellants.

GoVentures of Gaithersburg, Md., has a new design for a fill/drain valve that will be serviceable after acceptance testing and installation with reduced hazards. However, this design does not properly align the valve poppet and seats because of uneven spring deformation and tolerance stack-up.

The valve design was revised with simulation software to minimize uneven deformation in the spring, and a functional relationship analysis was conducted to reduce tolerance stack-up. Additional engineering work ensured proper material selection for valve components. These revisions are necessary to provide GoVentures with a proof-of-design prior to moving forward with the current design. 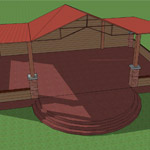 This site included remains of a once functional amphitheater, including a concrete stage and seating area. In an effort to save as many existing structures as possible and create a new area for Pokagon to hold outdoor events, the amphitheater site was rehabilitated. The project incorporated both structural and environmental design aspects.

Locating a radio beacon is a problem encountered in several endeavors, including science and the military. Whether tracking wild animals or friendly soldiers, there are two different approaches: GPS–based positioning and radio–tracking.

This project offered a small transmitter or beacon that can be carried by a person, a seeker′s antenna array which can be handheld or mounted in a frame, and a computer interface to indicate the beacon′s location. The team provided mapping as well as a simple direction and range estimate. 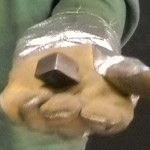 We developed a repeatable process that creates iron blocks with a predictable chemical composition. The process for creating these blocks consists of melting scrap iron, supplied by Metal Technologies, and pouring the molten iron into a mold attached to a heat exchanger.

The cooled test blocks were analyzed to ensure correct chemistry, composition, and microstructure by both the group and Metal Technologies. Various types of molds and heat exchangers were investigated and tested. A national market exists for these, and commercialization will be investigated.

Anderson Development Company of Adrian, Mich., produces acrylic resin used for powder coating applications. A xylene solvent is used in the manufacturing of this resin. The solvent is recovered from the process, but most of the recovered solvent is contaminated by other chemical compounds. This project involved the conceptual design of a xylene purification process.

The design processed the contaminated xylene solvent and upgraded it to meet the specifications of market grade xylene. Different design options to perform were investigated and specified. Preliminary equipment specifications and cost estimation were performed on each proposed design option. A rate of return and the advantages and disadvantages of each were considered along with a safety and environmental analysis.