Trine University thanked its generous supporters and honored alumni during the 19th annual Touchstone and Homecoming Celebration on Friday, Oct. 3. 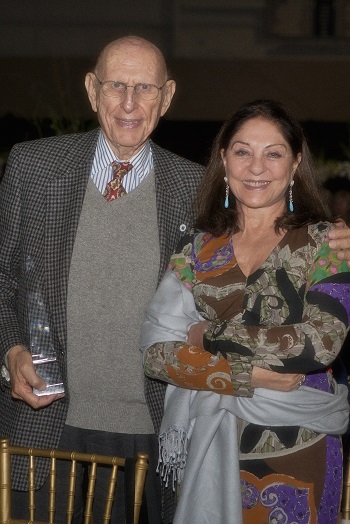 Trine’s top award, the Pillar of Success, was presented to Tomas Furth, a trustee and alumni who earned two degrees from Tri-State College, now Trine. Furth, for whom the T. Furth Center for Performing Arts is named, has long supported the annual and athletic funds and campus development. In addition, in 1992 he established the Tomas Furth Scholarship Fund for Trine mechanical and chemical engineering students.

“Dr. Tomas Furth can be described in many ways. He is dedicated, passionate, and loyal. His generosity has been a positive influence and impacted the lives of many, including faculty, staff and students here at Trine University,” Earl D. Brooks II, Ph.D., Trine president, said when before presenting Furth with the award.

Since 1997, the Pillar award has honored individuals who provide vital support through their commitment, loyalty and dedication. 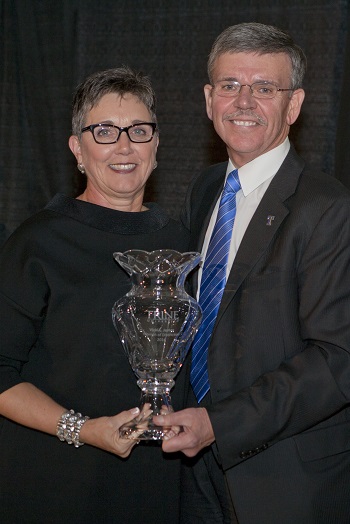 The Woman of Distinction Award was given to Vicki L. James, longtime Trine supporter and wife of board chair Rick L. James, who is also a Tri-State alum. Mrs. James was described as a “thoughtful, compassionate and inspirational” person who “inspires others to give.”

“She puts her heart into whatever she does and makes a lasting impact on those around her, helping to improve the lives and standard of living in our communities and helping those in need to become more successful,” Brooks said.

Since 2006, the Woman of Distinction Award has recognized the powerful contributions of women in the areas of philanthropy, business and education. It is presented annually to honor Marjorie Bowstrom, a Tri-State University trustee, Zollner Corp. retired board president and chief executive officer and Zollner Foundation director. 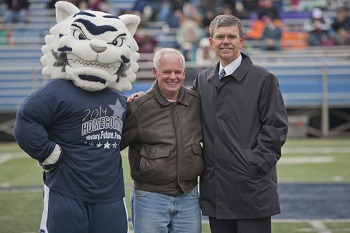 A lifelong transportation professional, Ness became director of the Idaho Transportation Department in 2010. He is responsible for an annual budget of more than $500 million dollars and provides leadership for more than 1,700 employees.

In just four years as director, Ness has presided over one of the most dramatic turnarounds of organizational culture in Idaho state government history that is now serving as a nationwide model. He is recognized as a national leader in organizational change.

The award is given each year to an alum who has attained a high level of achievement in his or her profession, is well thought of in his or her community, and who upholds the ideals of Trine University.

Former Alumni Association president Michael P. Darch earned the Distinguished Service Alumnus Award. Darch graduated from Tri-State College in 1967 with a degree in business administration. Immediately upon graduation, he began a career with NCR that lasted 32 years. He served the company in various capacities both domestically and internationally, including the five-year ownership of NCR by AT&T. 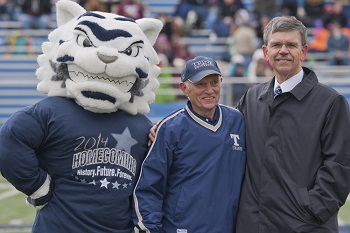 While serving in different managing roles internationally, Darch still managed to return to the campus frequently. He and his wife, Donna, were dedicated supporters of the Fred Zollner Athletic Stadium Renovation, and continue to support Trine University in a variety of ways. He’s also an active member of Kappa Sigma Fraternity, and is one of six fraternity brothers who built the fraternity home in 2009. A member of the honoree leadership society, Skull and Bones, Darch helps coordinate the Skull and Bones reunion at each homecoming.

The Distinguished Service Award is given each year to an alumnus/ae who has performed outstanding service to society in his or her profession, personal achievement or community; and who has manifest interest in Trine University and has supported it by contributions of time, talent, and money; by recruitment of students; or by placement of graduates. 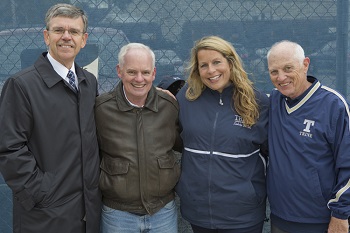 Sarah L. Brown, a 1998 managment major, is Trine’s Distinguished Young Alumna. Brown works in the Office of Alumni and Development at Trine University as the director of annual giving & foundation relations, fundraising for scholarships and campus projects. In 2013, Brown was named a member of the Greater Fort Wayne Business Weekly’s 40 under 40. She is also a member of the Trine University Athletic Hall of Fame for women’s golf. She is involved in the Angola community, serving on the boards of Junior Achievement, the Young Professional Network and the Steuben County Humane Society.  She enjoys reconnecting alumni to their alma mater and is financially supportive of the university.

The Distinguished Service Young Alumnus/Alumna Award is presented to an alumnus or alumna who is 40 years of age or younger who has performed outstanding service to society in his or her profession, personal achievement or community; and who has manifest interest in Trine University and has supported it by contributions of time, talent and money; by recruitment of students; or by placement of graduates.