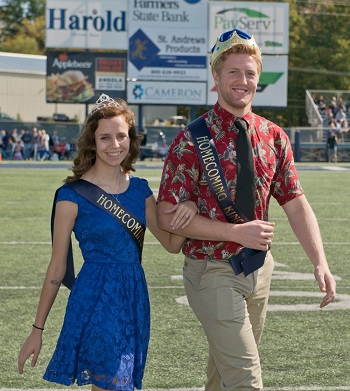 OCT. 14 -- The 2015 Trine University homecoming king and queen were crowned Friday at a homecoming pep rally.

The title of homecoming queen went to Grace Connolly, a senior biology major from Sheridan, Ill. On campus, Connolly is a member of the women’s track team, the National Society of Leadership and Success, Multicultural Student Organization and Gamma Phi Epsilon sorority. She is also the president of TriBeta and a Trine Orientation Leader. Upon graduation from Trine, Connolly plans to work in outdoor education and to create programs for students to visit natural areas.

Other students named to the homecoming court were:

Students with junior or senior academic standing were eligible to be nominated by other students, faculty or staff members. All nominees who met requirements were added to a ballot, which was sent in an online survey for voting. The top five male and top five female nominees following the popular vote made up the homecoming court and the top male and female were crowned king and queen at the pep rally and recognized at Saturday’s homecoming football game.