Trine University thanks supporters who made new softball field a reality 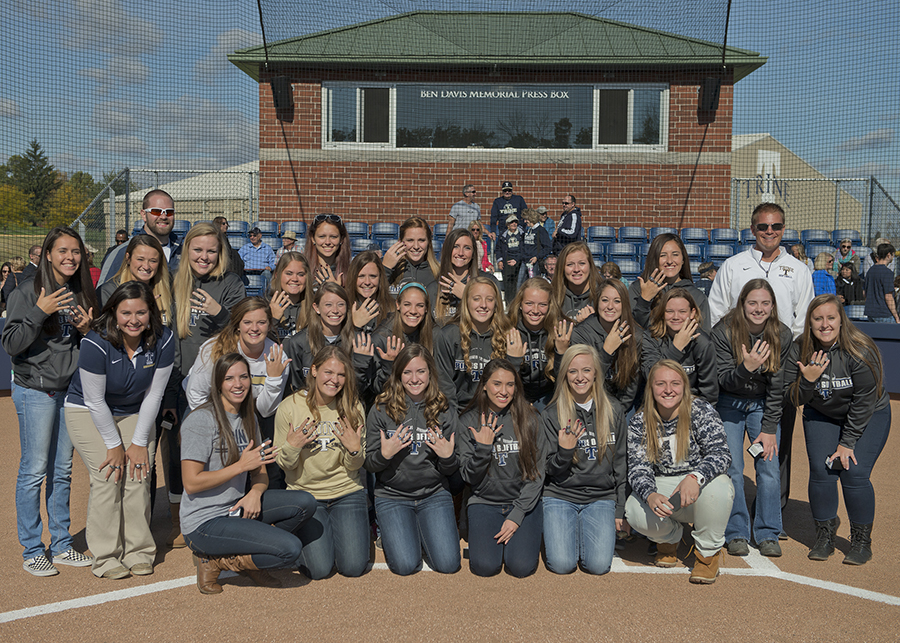 OCT. 12 – Trine University honored and thanked those who helped bring a new softball field and press box to campus. The Thunder softball squad was also presented with MIAA Championship rings after the dedication that took place Saturday during homecoming weekend.

“Many students say the campus size and opportunity to participate in intercollegiate athletics is what brought them to Trine University,” said Earl D. Brooks II, Ph.D. Trine president. “Of course, those two elements could be viewed as the face of the Trine experience that is built on a tradition of rigorous academics, plentiful opportunities both in and out of the classroom, and strong support from faculty and staff, friends and alumni.”

“We are thrilled to partner with Parkview Foundation and SportONE to provide this stadium,” Brooks said before presenting a plaque to Julie Fleck, chief operating officer of Parkview Ortho Hospital, and Joe Baer, a certified athletic trainer who provides support to Trine University and is a member of the Parkview Sports Medicine team.

Trine also recognized Drs. Gemlick and Pritchard with the presentation of a plaque. Later, the duo delivered the game day ball via helicopter for the Thunder football game with Olivet.

Other lead donors honored for their participation in the softball field project include:

After the dedication, the Thunder softball team received MIAA Conference Championship rings. The team has had eight straight MIAA conference championships and eight straight NCAA appearances reaching a national ranking as high as No. 2 in the nation in 2014.

They have averaged 30 wins per season since 2007 and competed in the College World Series / National Championship in 2014.