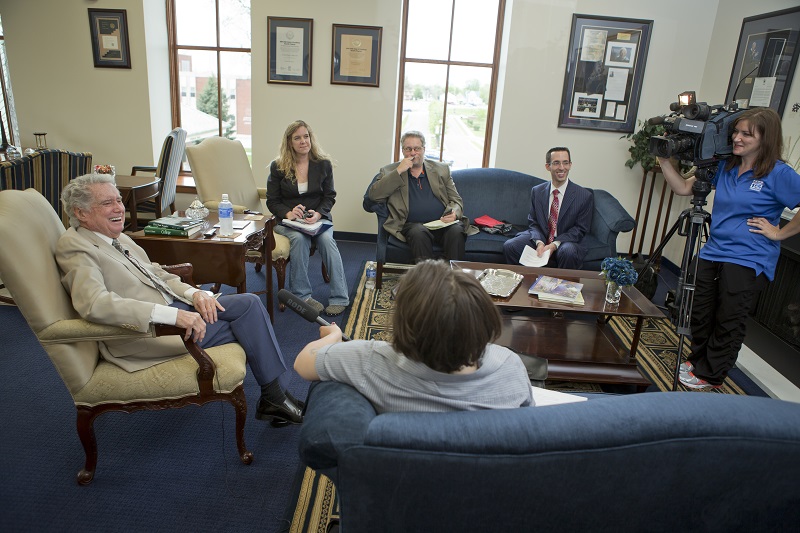 Regis Philbin was kind and more than generous with his time late Friday afternoon when he met with a team of local and area reporters for an exclusive question-and-answer session at Trine University. He will deliver the commencement address at 10 a.m. Saturday.

Television icon Regis Philbin illuminated the room when he met with a team of reporters Friday afternoon at Trine University.

On campus to deliver the commencement address on Saturday, Philbin made time in his busy schedule for a question-and-answer session with a few lucky reporters.

“What’s up? Who’s talking? Why am I here,” Phibin joked when he sat down with reporters`.

Philbin, who holds the Guinness World Record for Most Hours on Camera on U.S. Television, was just as charming and delightful as he is during his many television appearances.  He was most warm and sincere when he fielded questions about his life, the plight of television and his plans for the future.

At Trine for the exclusive session were Virginia Alvino with WBOI, the NPR radio station in Fort Wayne; Nicholas Ferreri, chief meteorologist with WANE-TV, Fort Wayne; Jim Measle, with WLKI radio Angola; Amy Oberlin with the Herald Republican in Angola and Catherine Porter, Trine marketing major and  intern at Trine.

Here’s a sampling of Philbin’s remarks:

Philbin is sure to wow the audience Saturday when he delivers the address during the 130th commencement at Trine University. The event is at 10 a.m. Saturday in Keith E. Busse/Steel Dynamics, Inc. Athletic and Recreation Center. Everyone is welcome to attend.