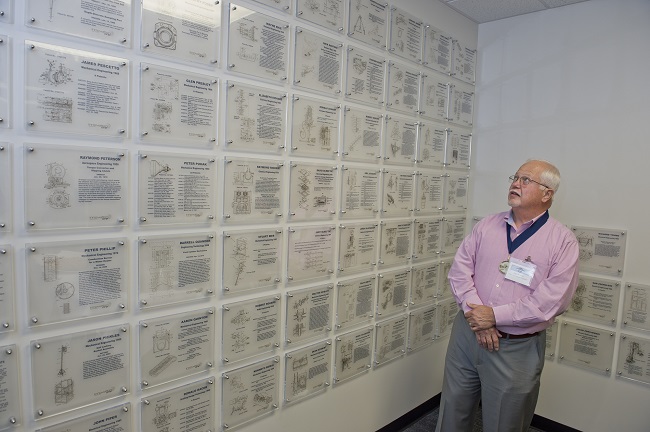 Featuring innovations including everything from a slot car track loop to the ground fault circuit interrupter found in modern homes, Trine University’s Hall of Innovation opened to the public during the university’s homecoming celebration.

Located on the second floor of the Jim and Joan Bock Center for Innovation and Biomedical Engineering, the Hall of Innovation showcases Trine University alumni who have reported to Innovation One, the university’s incubator for business, invention and design, that they hold a patent. At the time of its unveiling, the Hall featured plaques for 177 patent holders, who were responsible for about 920 patents.

“We had known for a while that there were a number of influential alumni who had patents and had invented things throughout their career,” said Jason Blume, executive director of Innovation One. “We opened up a search and started talking to people, and that’s really how it got started.”

Each plaque in the Hall highlights an individual patent holder. Single patents are featured on the plaques of those alumni who have one, while plaques for multiple-patent holders include the number of patents held with a brief description of some of the patents.

Patents featured include an inflatable fan finger for sporting events, the internal workings and cutting surfaces for a blender, a loop for a slot car track, a rotary tackle box for fly fishing, the technology that forms the basis for cruise control in automobiles, various designs for knee and hip replacements, a bracket that can join vertebrae for patients who have vertebrae deteriorating in their back, and the ground fault circuit interrupter.

Most of the alumni featured are engineering majors, with a handful of business majors, Blume said.

The most prolific Trine University class is the Class of 1966, which celebrated its 50th reunion during the homecoming festivities. That class includes several members with 20 or more patents.

The Hall will be “continually growing and dynamic” as Innovation One learns of more patents and as newer Trine alumni patent their own innovations, Blume said. Trine alumni who would like to have their patent included can email innovation1@trine.edu or call Innovation One at (260) 665-4983.

Photo: Dean Schmidt, a 1966 Trine University mechanical engineering alumnus, looks at some of the plaques displayed in the university's Hall of Innovation.