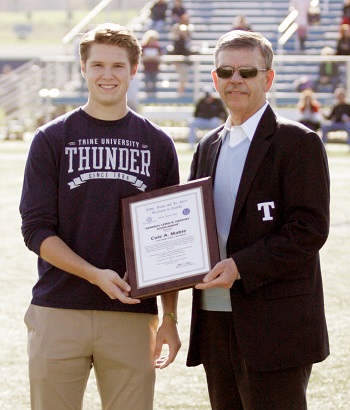 Cole Mabie, a Trine University junior from Plainwell, Michigan, was honored as the 2016 recipient of the General Lewis B. Hershey Scholarship during halftime of Saturday’s football game against Alma.

The General Lewis B. Hershey Scholarship was established in 1988 by Army, Navy and Air Force veterans in the United States and Canada to honor Gen. Lewis B. Hershey, a Tri-State College (now Trine University) alumnus and former Director of Selective Service for the United States. Hershey Hall, the Trine University fieldhouse, is named in his honor.

The scholarship is awarded each year to a Trine University sophomore or junior who has demonstrated academic achievement, with a minimum cumulative grade point average of 3.0, and leadership potential.

Mabie is the son of Alan and Christine Mabie and a graduate of Delton-Kellogg High School in Delton, Michigan. He is majoring in mathematics and is a member of the soccer team, honors program, Kappa Sigma fraternity and Ketner Fellows. He also serves as president of Trine’s math club and has been named to the MIAA Academic Honor Roll.