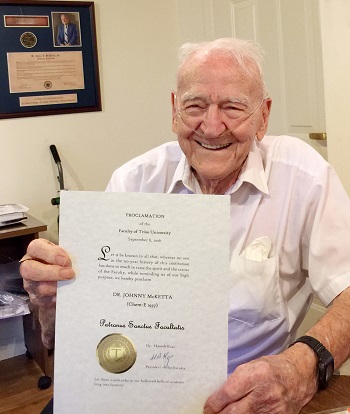 The Trine University faculty has issued a proclamation to name Dr. John J. McKetta Jr. the “patron saint of the faculty” in honor of his dedication to his alma mater. McKetta earned his bachelor’s degree in chemical engineering from the university, then named Tri-State College, in 1937.

The proclamation states, “Let it be known to all that, whereas no one in the 130-year history of this institution has done so much to raise the spirit and the status of the Faculty, while reminding us of our high purpose, we hereby proclaim Dr. Johnny McKetta Patronus Sanctus Facultatis.”

Immediately after completing high school, McKetta began work in the coal mines of Wyano, Pennsylvania. His first day on the job, the roof of the mine caved in, killing two miners. From that moment, McKetta searched for a way out of the coal mines and found an interest in chemical engineering. He wrote letters to 54 chairmen of chemical engineering departments across the country and received one response back, from Tri-State College.

In 1988, McKetta established the McKetta Teaching Awards because of Trine University’s influence on his education and career. Given annually to 10 recipients across various schools, 290 awards have been given to 261 recipients as of May 2016, totaling $1 million in gifts to the faculty. McKetta also held an essential role as one of the few faculty voices on the Trine University Board of Trustees, serving as a trustee for 50 years.

The Dr. John J. McKetta Jr. Department of Chemical and Bioprocess Engineering is named in his honor and he received the university’s Pillar of Success Award in 2001. He received an honorary doctorate from the university in 1967.

“The idea to honor Johnny in this way was faculty generated and enacted, possibly the only award of its kind in the world,” said Tom Tierney, founder of The Humanities Institute and professor emeritus of English at Trine University. “I suspect all who know Johnny have their ‘Johnny stories’, but the common thread of all of them is that we love him.”

Tierney presented McKetta with a certificate of this unique honor on behalf of the university on Sept. 8.