Oeder honored by Trine with Pillar of Success 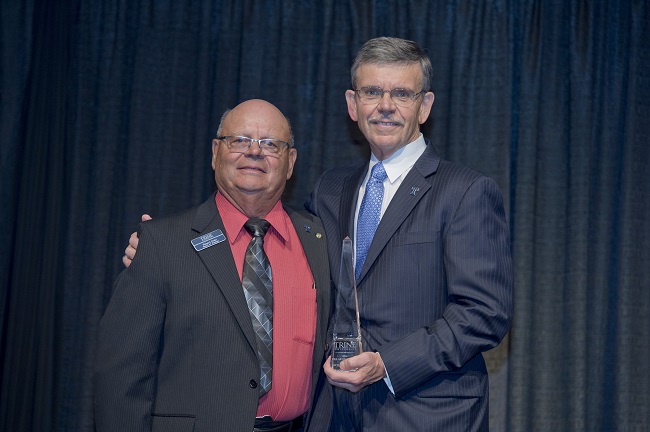 An alumnus, trustee and longtime supporter of Trine University was honored during homecoming weekend with one of the school’s most prestigious awards.

Richard Oeder of Morrow, Ohio, was surprised with the Pillar of Success award, which recognizes individuals for their achievements and accomplishments, leadership, service, philanthropy, commitment to their community and profession, and to Trine. A video featuring images of Oeder throughout his life was shown to guests at the Touchstone and Homecoming Celebration Dinner on Friday, Sept. 30.

In presenting the award, Earl D. Brooks II, Ph.D., Trine president, described Oeder as “a man dedicated to community service and helping others.”

“He is engaged and loyal – and has a genuineness about him that inspires others,” Brooks said. “His generosity – and that of his wife’s — has been a positive influence and impacted the lives of many, not only in their community, but to students, alumni, faculty and staff here at Trine University.”

“We love this institution,” Oeder said in accepting the award. “This is a great university and whether I’m on campus, whether we’re travelling or we are home, we are still talking about this particular school. We are so fortunate to have great leadership, a wonderful president, a great cabinet, great board, great instructors and just a wonderful group of alumni who make things happen for this particular school. This is a premier university and I’m proud to be part of it.”

Oeder grew up in Hamilton Township, Ohio. His father, Les, started a concrete block and excavating operation in 1929, building many key attractions in the area, as well as Oeder’s Lake, the massive expansion, he, and later Richard, called home.  For decades, Richard has allowed civic groups – ranging from firefighters in training to Boy Scouts to senior citizen groups – access to his family’s lake and the surrounding camping area.

A member of the Trine University Board of Trustees since 1995, Richard has been involved in many activities on and off the Trine campus, serving on various boards and committees from academic affairs to student life. He currently chairs the Campus Planning committee and serves on the Executive Committee and Committee on Trustees – also serving as a mentor to new members of the board. He is a past president of the Trine Alumni Association Board of Directors, and in 1995 he received the Alumni Distinguished Service Award.

In 2012, the Warren County Foundation honored Richard during its annual awards banquet with the George R. Henkle Philanthropy and Community Service Award, stating that Richard “is involved in so many different organizations and groups that benefit Warren County, it’s almost impossible to name them all. His whole family has set an example of volunteering that would inspire anybody.”

“Richard is a friend to everyone,” said Brooks. “We are truly lucky and blessed that he and (his wife) Kathy are engaged and remain dedicated to the growth and success of Trine University. Richard and Kathy, we treasure your friendship and are grateful and appreciative for all that you do.”