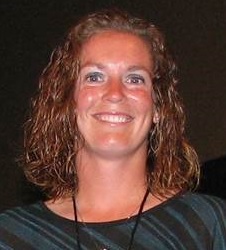 The statewide award recognized her contributions made to county government.

Sharkey began with the Steuben County Highway Department in 2013. Steuben County was without a highway engineer for some time when Sharkey was appointed to lead the department and has led the county on a path of unprecedented growth in terms of upgrades and reconstruction of roads.

“I am very honored to have been recognized and am thankful to serve such a supportive and engaged community,” Sharkey said.

She has contributed to multiple projects including the continuation of the bike trail from the Angola city limits to Hoosier Hill. She has managed many other projects, some of which led to statewide recognition in 2015 from the AIC.

“We are fortunate to know that we have a most excellent engineer,” said Ron Smith, president of the Steuben County Board of Commissioners. “Since she has been with us in Steuben County government, we believe we could not have gotten a better person for that job.”

Smith said Sharkey works well with state officials, does all that is asked of her and more and works hard on securing grants. She solves problems instead of working around them and keeps projects on the drawing board and is ready to strike when an opportunity comes from state or federal funding.

“Jen is a wonderful asset for Steuben County. We are fortunate to have such a forward-thinking and dedicated person working for the county,” said Rick Shipe, president of the Steuben County Council.

The AIC’s Annual Conference is the largest gathering of county officials in the state. Representatives from public agencies, private entities and local elected officials addressed issues such as: the future of road funding, how new federal labor rules and regulations affect counties, government ethics, trends on open data and government transparency, and Medicaid expansion, among many other issues impacting county government.

In addition to her duties as highway engineer, Sharkey leads the Indiana section of the American Society of Civil Engineers. She also is head coach of the Angola High School soccer team. She played college soccer for Tri-State University, now Trine University.

Story and photo provided by The Herald Republican