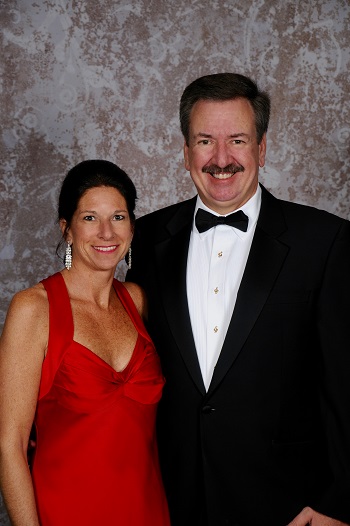 Trine University has received a major gift toward the construction of the new Thunder Ice Arena, set to be complete in fall 2017.

Chuck and Lisa Surack and Sweetwater have pledged $300,000 toward the construction of the Thunder Ice Arena. In recognition of the gift, the Sweetwater logo will be displayed below the Trine T on center ice.

“We are honored to support Trine University, a key part of the northeastern Indiana region that Sweetwater calls home,” said Chuck Surack. “I’m particularly proud because my father Jim graduated with a degree in Chemical Engineering in 1956 from Tri-State College, now known as Trine University. The education Trine provides to students and the services it provides to the community benefit the quality of life and place throughout this area, and we look forward to seeing all that Trine will accomplish as it continues to grow.”

“We continue to be grateful for the many people who support Trine University’s facilities and programs through their generous giving,” said Earl D. Brooks II, Ph.D., Trine president. “The excitement on campus is building as construction of the Thunder Ice Arena progresses, and we are looking forward to seeing our new hockey teams take the ice in the fall of 2017.”

The Suracks are leading philanthropists in the Fort Wayne area, donating to more than 600 causes annually. The Association of Fundraising Professionals gave them the Outstanding Philanthropic Award in 2015.

The Thunder Ice Arena will be the home for Trine University’s men’s and women’s hockey teams. The arena also will host club and youth hockey programs for the Steuben County YMCA and local school corporations, and will be open to the public for skating at designated times.

The gifts are part of the Invest in Excellence campaign, which the university expanded from its original $75 million to $125 million last month. More than $83 million — 66 percent of the final goal — has already been raised.

Founded in 1979, Sweetwater is the nation's leading retailer in instruments and pro audio equipment for musicians, recording studios, broadcast, education, and houses of worship. Sweetwater's customers can be found everywhere music is heard and audio is played, broadcast, or recorded, including recording, film, and broadcast studios in New York, Nashville, Los Angeles, Chicago, and Miami; in hundreds of thousands of home recording studios; and in schools and churches nationwide. Sweetwater's founding and meteoric growth are built on a knowledgeable and experienced staff, outstanding selection and pricing, and above all, an unwavering commitment to customer service excellence in every situation. For further information, visit Sweetwater.com .