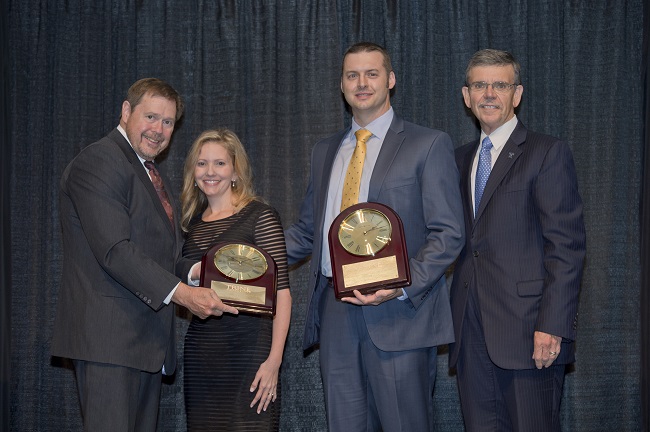 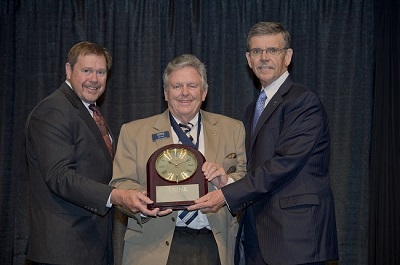 Three alumni awards were presented at the Touchstone and Homecoming Celebration Dinner on Friday, Sept. 30, as part of Trine University’s 2016 homecoming events.

Ryan worked as a CPA for Price Waterhouse & Co. in Toledo and Cincinnati, Ohio, from 1966 to 1974. He moved on to spend 10 years as vice president of corporate planning for DuBois Chemicals before becoming vice president of mergers, acquisitions and divestitures for the Johnson Group, an English holding company.

In 1987, he purchased a small environmental company, which he expanded over the next 17 years into a dominant supplier of disposal and recycling services for many customers in the Midwest. In 2004, he sold the company to his 135 employees via an employee stock ownership plan.

Ryan has served as a member of Trine University's Board of Trustees since 2009 and is active on the Campus Planning Committee and the Committee on Trustees.  The Ryan Concert Hall in the Furth Center for Performing Arts is named in honor of Ryan and his wife, Sig, as well as the Ryan Tennis Center and the Ryan Skywalk connecting the Rick and Vicki James University Center with the Zollner Athletic Stadium. 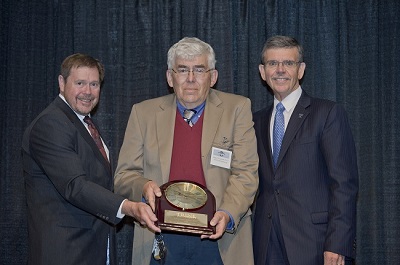 Edward R. Gerecke Jr., P.E., a 1970 civil engineering graduate, is the 2016 recipient of the Distinguished Service Award. The Distinguished Service award is given each year to an alumnus/ae who has performed outstanding service to society in his or her profession, personal achievement or community; and who has manifest interest in Trine University and has supported it by contributions of time, talent, and money; by recruitment of students; or by placement of graduates.

After working for two years as an assistant field engineer for Bethlehem Steel Construction, Gerecke began a 30-year career with the New York State Department of Transportation as a civil engineer. Among other projects, he developed the scope of work for an upgrade of an 89-mile section of New York Route 17, Southern Tier Expressway, to Interstate 86 standards. He also developed a proposal for the design and construction for two safety rest areas on the I-86 expressway, and updated two cycles of the Federal Appalachian Cost Estimate for an 89-mile section of I-86.

After retiring from NYSDOT in 2003, he served as an on-call disaster assistance representative for the New York State Office of Emergency Management. In that position, he worked with FEMA on federal disaster declarations to evaluate and prepare storm claims and complete project closeouts. During the summers of 2003, 2004, 2005 and 2008 he served as a member of the transportation staff for the Chautauqua Institution, a nonprofit adult education center and summer resort, and since 2004 has served as a substitute bus driver for Lake Shore Central Schools in Angola, New York.

James Sturgeon, 2002 BSME, and Amanda Sturgeon, 2002 BSBIO, are the 2016 recipients of the Distinguished Service Young Alumnus/a Award. The Distinguished Service Young Alumnus/a Award is presented to an alumnus or alumna who is 40 years of age or younger who has performed outstanding service to society in his or her profession, personal achievement or community; and who has manifest interest in Trine University and has supported it by contributions of time, talent and money; by recruitment of students; or by placement of graduates.

Amanda has worked for Coastal Carolina University for 14 years, where she currently serves as lab manager for the Environmental Quality Lab, a nonprofit facility within the School of Coastal and Marine Systems Science emphasizing education, research and community service. The EQL is a state-certified analytical chemistry and microbiology lab focused on environmental investigations. She is an active member of the Water Environment Federation and the Water Environment Association of South Carolina.

James has worked for 14 years for Conbraco Industries, a manufacturer of commercial and industrial flow control products, including the Apollo ball valve. He currently serves as foundry manager, where he is responsible for plant operations in the production of investment castings and sand castings in corrosion-resistant alloys, high alloy steels, super alloys and titanium. He is the past chairman of the Piedmont Chapter of the American Foundry Society and is also a member of the AFS 4L Technical Committee on investment casting. He was instrumental in establishing the foundry lab at Trine University and assisted Virginia Tech with the development of its cast metal program.