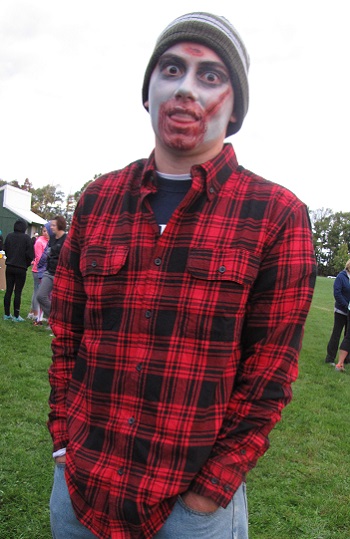 The zombie 5K was held Oct. 22 on the Glen Oaks campus, where Trine is also located.

“Each year our center has two seasonal/public events and one community outreach event/day,” said Kelly Eaton, campus director. “This year we decided to combine our fall event with our community service.  We planned the event date so that fall colors would be at peak for the fall – and also close to Halloween – for the Zombie Run. The 5K course here at GOCC is quite nice, with a good part of it going through the woods.”

Eaton said she originally proposed the idea to St. Joseph County United Way Director Kelly Hostetler, noting that a zombie 5K had not been held previously in the county.

“The United Way liked the idea so I approached Glen Oaks Community College Director of Marketing and Communications Val Juergens to see if they would like to partner on the event,” said Eaton. “We put together a committee of people from Trine Centreville, GOCC and the United Way board and started planning late last spring.”

The day began with a Cardio Warm Up led by members of Radiant Life Church from Sturgis, Michigan.

“The church brought their sound system and had about 20 dancers, which included some of our zombies,” Eaton said. “The cardio was followed by a 1K fun run and then the 5K.”

In a zombie 5K, runners wear a flag football belt with the object being to get through the race without losing their belt to a zombie along the course. Eaton said the course at Glen Oaks that she and Trine admission counselor Amber Titus created included five zombie zones, with zombies played by Trine students, Sturgis High School Key Club members and several people from the community.

“As the runners approached the zombie zones, they had to avoid the zombies in an attempt to keep their belt,” she said.

About 60 runners participated, and a total of $3,847 was raised for the St. Joseph County United Way. Funds were raised through runner entrance fees and sponsorships from area businesses.

“We had several area businesses that sponsored both monetarily, in kind, and with goodies to provide the racers with registration bags and top ten finish prizes,” Eaton said. “The Sturgis Journal and Swick Broadcasting were very generous with in-kind support through print and radio advertising.  Kelly Hostetler and I were able to be morning show guests on WBET with Mike Stiles to promote our event and the Sturgis Journal printed our event flyer for us at no charge.”

Eaton said feedback from the runners indicated a good time was had by all.

“Runners will travel for fun races so it seemed that they liked the proximity of this race – we had a runner drive here from Lansing to participate,” she said. “We heard from many runners that they would like to see more activity as part of the event, so next year we are considering making it a dusk run instead of a morning run and having a bonfire afterward.”

She said the organizers were also very pleased with the amount raised for the United Way.

“It’s hard to predict how well you will do with a fundraising event when it’s the first time to execute, so I think we did well,” she said.