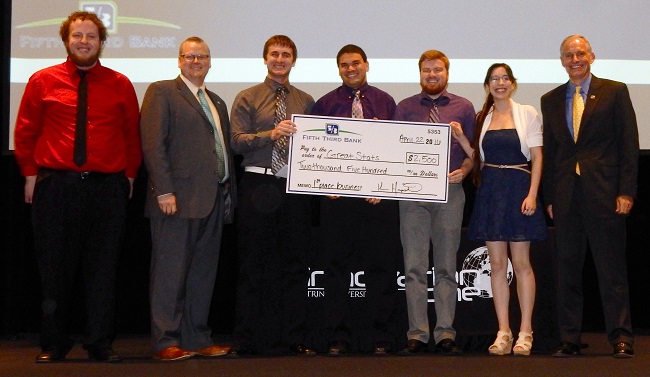 Glasses that can signal someone with a visual impairment when an object is near and an improved method for keeping sports statistics were the top award-winners in Friday’s third annual Innovation Challenge expo at Trine University.

The top prize of $2,500 in the Technology category went to VibeSense, designed by Trine University freshmen Braden Hale, an electrical engineering major from Austin; and biomedical engineering major Animesh Kunwar, from Santa Rosa, California. Annual prizes for the Innovation Challenge are presented by Fifth Third Bank. 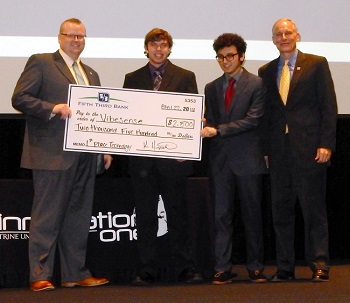 VibeSense glasses use ultrasonic sensors to detect nearby objects. As the person wearing the glasses gets closer to an object, the glasses vibrate with increased frequency.

Hale said the inspiration for the idea came from a swimming coach who talked about swimming “blind” — without goggles — and from a 9-year-old girl in his hometown who has visual impairments.

“Something like our product would go a long way in helping her live a more normal life,” Hale said. “We’d love to take it farther in the future. We’ve got great feedback from some of the judges and professors and different people we’ve talked to.

“We’re very thankful to Innovation One for giving us the chance to try what we can, to try to make a difference.”

Second place in the category went to the Reverse Door Bar, a device to lock school classroom doors in an active shooter situation, designed by Alex Munger, a freshman design engineering technology major from Pioneer, Ohio; and Toothpaste Fun, a toothpaste tube cap that would allow toothpaste to be squeezed out in various shapes, designed by Anne Mammel, a senior biomechanical engineering major from Tecumseh, Michigan.

“We’ve been able to make an endgame form, a consistent way to control across all sports and a user-friendly graphical user interface rather than having to input little initials for every little single play that you wanted to put into the sport,” said Morris.

“High schoolers will have documented statistics for their sports career while in high school. They can use this as a sort of resume to apply to colleges, and colleges can come and scope out potential players.”

Second place in the business category was won by ReflectED, a web-based educational tool that customizes schoolwork based on the unique interests of each student. The project was sponsored by Anthony Kline, Ph.D., assistant professor in the Franks School of Education, and developed by Trey Calver, a senior finance major from Shelby, Ohio; and Devin Gingerich, a senior computer engineering major from Middlebury.

Brandon Heal of Wolcottville won the award for Best Community Entry. Heal developed the concept for Modifi, a business to design and sell commercial office furniture and accessories.

The award for Best High School Entry went to the Sun Funnel, developed by Dylan Cauffman and Ciera Silva, 10th-graders at Career Academy South Bend. The Sun Funnel is an object that, when attached to the eyepiece of a telescope, allows the user to look directly at the sun. The students 3-D modeled and printed the device at their school.

The Innovation Challenge, introduced in 2014, is open to students and residents of Indiana, Michigan and Ohio. Awards and scholarships are funded by a $100,000 gift from Fifth Third Bank, Greater Indiana.

About Fifth Third Bank
Fifth Third Bancorp is a diversified financial services company headquartered in Cincinnati, Ohio. The Company has $142 billion in assets and operates 1,241 full-service Banking Centers, including 95 Bank Mart® locations, most open seven days a week, inside select grocery stores and over 2,500 ATMs in Ohio, Kentucky, Indiana, Michigan, Illinois, Florida, Tennessee, West Virginia, Pennsylvania, Missouri, Georgia and North Carolina. Fifth Third operates four main businesses: Commercial Banking, Branch Banking, Consumer Lending, and Investment Advisors. Fifth Third also has an 18.3% interest in Vantiv Holding, LLC. Fifth Third is among the largest money managers in the Midwest and, as of March 31, 2016, had $303 billion in assets under care, of which it managed $26 billion for individuals, corporations and not-for-profit organizations. Investor information and press releases can be viewed at www.53.com. Fifth Third's common stock is traded on the NASDAQ® Global Select Market under the symbol "FITB." Fifth Third Bank was established in 1858. Member FDIC, Equal Housing Lender.