Haseeb Kazi, Ph.D., associate professor of mathematics at Trine University, has been honored with the 2016 Distinguished Teaching Award by the Mathematical Association of America, Indiana section. 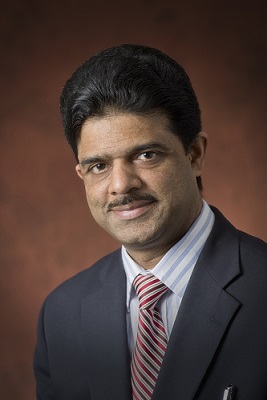 Kazi was presented the award following the organization’s banquet on Friday. He also has been nominated by the Indiana section for the Deborah and Franklin Tepper Haimo Award from the national MAA organization, which honors college or university teachers whose teaching effectiveness has been shown to have influence beyond their own institutions. The award is given to no more than three educators from the United States or Canada each year.

Kazi’s citation for IN-MAA’s Distinguished Teaching Award reads, in part, that “This year’s recipient possesses an impressive record of growth and recognition as an educator, scholar, program director, and faculty president.

“Together with the new course development including the capstone course in mathematics, he is actively involved in student advisement and undergraduate research. He has been helping his students in securing study, job, and internship opportunities in the USA and abroad, and has been pivotal in coordinating various study and exchange agreements with foreign institutions. His willingness to go the extra mile has been recognized via prestigious institutional awards for excellence in both teaching and scholarship.”