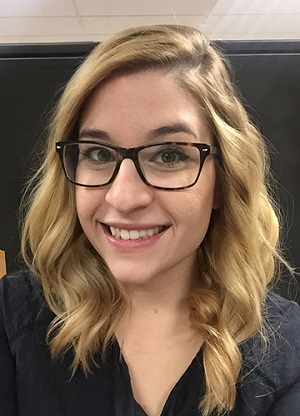 From switching majors to changing schools, Amber (Leavell) Owens has had experiences that all varieties of students can learn from.

Owens attended Ivy Tech Community College for two years and graduated with an associate’s degree.  Now completing her bachelor’s degree at Trine University’s Warsaw Education Center, she graduated as a communications major at the end of the fall term.

The path to graduation has not always been easy.

“It wasn’t until I took a Mass Communications class while finishing my associate’s degree at Ivy Tech that I realized that I was interested in the communications field. I had a wonderful instructor who became a mentor. The class was discussion-based and gave us the opportunity to explore the topic in a non-traditional way.”

After graduating from Ivy Tech, she spent a year as an English major at Manchester University.

“In my first term, I took a New Media studies class with a professor who was a major nerd and loved pop culture,” she said. “He was the first professor I could relate to personally and it was his New Media classes that ignited my interest in communications to a full-blown passion. I ended up taking three classes with him that year, and I loved every minute of it.”

However, she said living off campus and being a commuter student made everything more difficult.

“It was hard to connect with other students and truly feel like a part of the school since I didn't live on campus, so I always felt a little like an outsider. Add on the fact that I came in as a new student in my third year of college: I wasn't a freshman, but I was still new. Although I loved the program and classes, it was hard to feel like I belonged," she said.

“After my first year, I decided to take a break from Manchester, but when I was ready to go back, I realized that it wasn't the right fit for me. Finding Trine was about finding my balance. I needed a traditional university that understood my need to have a full-time job and a life outside of classes, which meant I couldn't afford to sit in 15 hours of lecture each week as a traditional student.”.

However, her transfer process began with a little bump in the road.

“The day I started my application to transfer to Trine I ended up having a really bad accident that blew out my left knee completely. I tore two of the ligaments in my knee and sprained my ankle so bad I couldn't feel my toes,” she said.

“I forgot about my application until the following week when I was laying on my couch waiting for MRI results and the transfer coordinator called me to check in. She was really understanding of my situation and helped keep me on track to get the rest of my application finished over the next few weeks.”

She said that Allison Finch and Kristin Conley have been vital to her success at Trine. Finch is an enrollment specialist at the Warsaw Education Center, while Conley is the director.

“They've been around since I first applied and were some of the people who helped me in the very beginning. Alli has visited Ivy Tech to speak with the PTK honor students I advise and the passion she has for helping students succeed is truly inspiring.”

“I’ve been working part-time for Ivy Tech Community College now for about 4-1/2 years. Before taking on my second job, I was working about 30 hours a week, which really allowed for me to be able to take full-time classes and still have somewhat of a life with my then-fiancé, now husband.”

Owens also works as an administrative assistant for the clinical research department of DePuy Synthes, which is part of the Johnson and Johnson Family of Companies.

“A part-time position opened up at a local orthopedic company this past summer, and I had connections that helped me land the job. It was something that enabled me to keep my job at the college while also earning a little more money and gaining some more work experience,” she said.

“I know that everything I’m doing right now will end up providing me with some fantastic opportunities in the future. I started college six years ago, and I took a lot of time off while trying to figure out what I wanted to do. It’s taken so long that I’m ready to complete what I started so long ago, and the only way to do that is to dedicate myself to it all 100 percent.”

Owens has also had to go through planning a wedding.

“I think the only thing that saved me was my type-A, control freak personality," she said. "I really love to plan things, so planning my wedding was something I actually enjoyed doing. I had to drag my textbooks and laptop along with me on my honeymoon, and let me tell you, it was not fun having to sit in a resort hotel room and work on homework when you’re in sunny, honeymoon paradise.”

Owens had some advice to offer for students who are struggling to balance work and school.

“My best advice is to find the balance that’s right for you," she said. "My journey to this point has been extremely stressful, and finding the balance of personal time and school time is so important. I’ve found that when the weekend rolls around, I’m often too busy to be able to stop what I’m doing to work on assignments or tests.

“Then, I have to skip out on time with my family to work on school stuff. It can be really discouraging. I try (and sometimes fail) to get my classwork done during the week when I don’t have anything else going on. I work on assignments during my lunch hour, or if I have free time in the evening after I get off of work. I find that when I get my classwork done before the weekend rolls around, I feel a lot less stressed and happy that I can spend my weekend doing the things I want to do. It makes it easier to keep on going.

“I would advise anyone and everyone to keep on going, no matter how hard things get. This past spring, I got really burned out and started to let my grades slip because I couldn’t find the motivation to do my schoolwork. It was a rough semester, and the only thing that kept me going was knowing that if I failed my classes, dropped them, or took a break, it would just be that much longer before I was done. I’m really glad that I didn’t allow myself to give up, because it’s about to all pay off!”

Owens hopes to use her communication degree to get into the marketing field.

“Although I don’t have much marketing experience, a lot of my studies have been dedicated to learning about digital media and how people use it to communicate. I love seeing those topics at work and my dream is to combine my knowledge in a career that allows me to be creative at the same time,” said Owens.