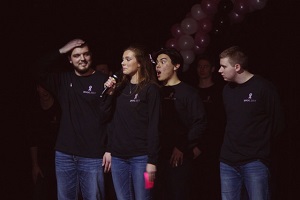 The 17th annual Big Man on Campus (BMOC), sponsored by Trine University’s chapter of the Theta Phi Alpha sorority, raised more than $11,000 for the Vera Bradley Foundation for Breast Cancer through a week of activities culminating in a pageant on Friday, Feb. 10.

The total was more than twice the $4,600 raised at last year’s event, a record at the time.

“It amazes me how much of an impact my sorority and the Trine community can have when coming together to reach a common goal,” said Carly Osinski, president of Theta Phi Alpha and organizer of the event. Osinski, a junior from Noblesville, is majoring in marketing.

Eight male students took part in the competition. Willy Macedo, a junior from Elkhart majoring in exercise science, came in first; Cam Buzzard, a junior exercise science major from Warren, was second; and Braydon Poulson, a junior civil engineering major from Warren, came in third. Adam Miller, a senior elementary education major from Fort Wayne, won Mr. Pink Ribbon, which recognizes the contestant who was determined through a vote of the other contestants to have shown the most enthusiasm and sportsmanship.

Penny Wars, which took place throughout the week, made up 20 percent of each contestant’s score. For this event, each contestant decorated a milk jug and tried to get it filled with as much money as possible. Penny Wars raised $2,500 of the total amount.

War Night, held the Wednesday before the pageant, also counted for 20 percent of the score. The contestants, each joined by four friends, participated in a high-heeled obstacle course, dizzy bat race, three-legged race, tug of war and jump rope competition.

Pageant Night made up 60 percent of the contestants’ scores and included formal wear, pick-up line, talent, hero and Q&A. Those who attended the pageant heard from Leslie Doig, aunt of a Theta Phi Alpha sister and a breast cancer survivor.

“Her speech reminded us all why we continue to put on this event each year,” Osinski said.

Throughout the week Theta Phi Alpha sold BMOC T-shirts. The sorority also received door prizes and monetary donations from Angola-area businesses, and this year an online donation page drew contributions from outside the area.

“Being part of this has been one of the most fulfilling things I have ever done,” Osinski said. “It is something way bigger than myself and impacts so many people.”