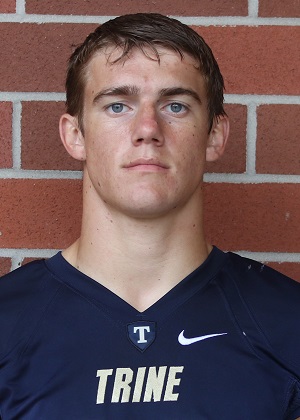 While many students look for any way to cover the cost of college, freshman Jacob Chesney’s story of how part of his Trine University education was financed is particularly unique.

Chesney, from Kirklin, Indiana, was the subject of a video that won the $100,000 grand prize in 2002 on the television show AFV, or America’s Funniest Home Videos.

The video is available at youtu.be/X6kl9rJ46-I.

“I was on vacation with my family in Florida and we were at my grandma’s house,” he said. “I guess I was just tired from that day and was going to have some ice cream before bed and just fell asleep.”

The video was submitted by his grandmother and his parents traveled to California for the taping of a regular episode and then again for the grand prize episode. The adults decided to put the money toward college for Chesney and his three siblings.

“I don’t think they were expecting it to go so far, but they must have just thought it was funny enough to submit it and see where it went,” Chesney said. “Technically it was my grandma’s money, since she took the video and submitted it, but they just put it all straight to college.”

Despite the national TV appearance, Chesney said his stint on AFV didn’t get a lot of attention when he was growing up.

“I don’t remember a lot about it, so I don’t think about it too much. I think my family’s the same way. It was a long time ago,” he said. “Occasionally at school somebody would say they saw me on TV, but it was really nothing more than that.”

The prize money gave him more flexibility in choosing a college, but Chesney said two things in particular drew him to Trine - the university’s strong engineering program and the opportunity to play football. A safety, Chesney had 16 tackles in varsity play for Trine this season.

“I just thought it was a good fit,” said Chesney, a civil engineering major who hopes to focus on water resources. “It’s a great engineering school, that’s number one, and then on top of that I get to play football.”

As Chesney went through the freshman orientation process, he took part in several ice breakers where he was asked to share something unique about himself. It wasn’t too hard for him to think of something.

“I had to come up with a fun fact so many different times. It started there, but word spread,” he said. “It kind of just blew up here.”

He said most of the questions he gets about the experience are from other students who have heard the story secondhand and want to know if it’s true.

“Once they see the video, they’re surprised and want to know more,” he said.

In addition, Chesney was recently mentioned in a Variety story about past prize winners from AFV.

“Other than back when I first won it, this is the most publicity it’s received,” he said.