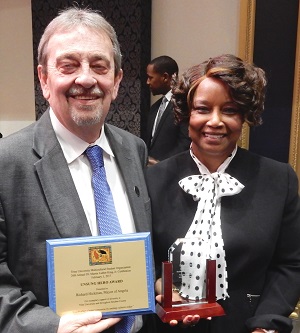 Moved to the T. Furth Center for Performing Arts to accommodate the world-renowned Voices of Unity youth choir and attended by a record crowd, the program included previously unannounced presentations of Unsung Hero awards to Angola mayor Richard Hickman and Deborah McHenry, executive director of student success and retention and advisor for the Multicultural Student Organization (MSO).

The MSO hosted the event Friday, Feb. 3, and presented both awards.

Following student Breeonna Farrow’s reading of the Maya Angelou poem “Still I Rise” — which provided the theme of “Still We Rise” for the evening — Hickman welcomed those in attendance to the Angola community by reflecting on King’s legacy. He noted that, “even with our history in our country of how people treated and perceived people of color, people of different faiths, or people of different backgrounds or ethnic origins, Dr. King’s messages were always about faith and hope for America’s and the world’s future.”

“We need all of us to make our country better through Dr. King’s positive examples,” Hickman said.

Elyse Buehrer, a 2016 Trine graduate, then sang “Amazing Grace” in seven languages and Voices of Unity performed several musical selections before Andre Ebron, a 2004 Trine graduate who serves as dean of students at the Cornerstone Charter School in Detroit, presented the first Unsung Hero award to Hickman.

Describing the mayor as “influential, charismatic, a visionary, assertive, inspirational, a man of humility, and one who gives sacrificially,” Ebron told Hickman, “Not only did you practice diversity in concept, but you expressed it from your heart and I know that it’s the love of God resonating toward all men.” 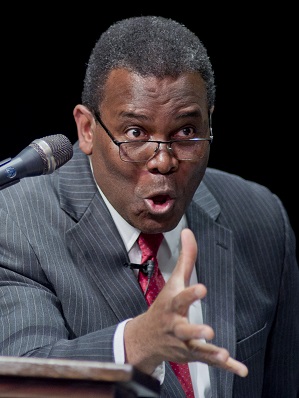 He closed his address by encouraging those in attendance to, “ignore the pundits. Ignore the individuals who would prophetically speak evil against America. And may we resolve as a people that we are one nation under God, indivisible, with liberty and justice for all. Then we can say, ‘And Still We Rise.’ ”

Before McHenry could deliver her closing remarks and Voices of Unity could finish its performance, MSO members surprised McHenry with the second Unsung Hero award of the night. Calvin Skinner, area coordinator for Trine’s Office of Student Services, praised McHenry as “an advisor, a mentor, a mother, a wife, a community leader, a champion for student success and cultural connection.”

“I love what I do here at the university,” McHenry responded. “It’s always tedious trying to organize and make sure that everyone’s in their place and doing what needs to be done, but once it all comes together, seeing this phenomenal audience — you’re amazing.”