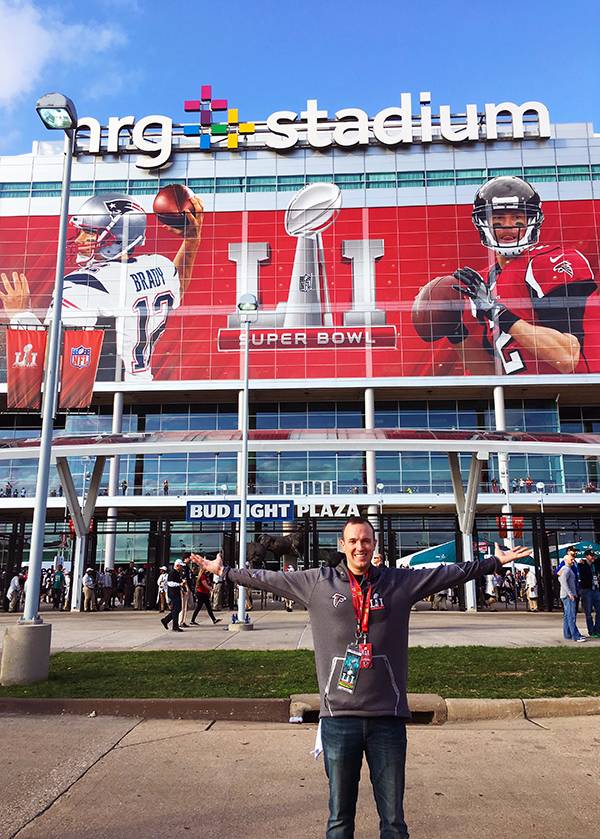 ATLANTA — Since Brandon Ringeisen was a child, attending the Super Bowl was at the top of his bucket list.

On Feb. 5, he was able to check it off thanks to a career in sales and the kindness of Arthur Blank, the owner of the Atlanta Falcons.

Ringeisen graduated from Trine University in 2012 with a degree in business administration and sports management. He transferred from IPFW halfway through his college career and became actively involved in the Alpha Chi and Delta Mu Delta honor societies.

After leaving the university, Ringeisen interned and gained experience in the sales industry.

“I interned with the Fort Wayne Mad Ants (NBA D-League), became an inside sales representative with the Atlanta Hawks, and then became a premium sales representative with the Atlanta Falcons,” he said. “Afterward, I moved to Minnesota in January 2014 and worked for Van Wagner Sports & Entertainment as a sales consultant for the Minnesota Vikings. Finally, I moved back to Atlanta in February 2016 to close out the Georgia Dome and open up the Mercedes-Benz Stadium.”

“This is my second stint with the team, and I knew the culture fit was perfect. Arthur Blank takes care of his employees.  He took the entire staff to the Super Bowl. That’s just the tip of the iceberg, though. The management staff is great to work for.”

He said his job as a premium sales representative comes with some perks.

“I’ve had the opportunity to meet key business leaders in the community and pick their brain,” he said. “You also build relationships with these influential people, who then introduce you to others.”

His experience with the Atlanta Falcons provided great memories even before the Super Bowl.

“Winning the NFC Championship game that sent us to the Super Bowl was memorable,” he said. “Excluding anything playoff-related, though, I would say touring the new stadium with Rich McKay and Mike Gomes, and learning about all the details that make this so special.”

Ringeisen said finding out he would be attending the Super Bowl was an unexpected, but pleasant surprise.

“It was a bit surreal for a while because going to the Super Bowl was on my bucket list, just like any sports fan. Now I had the opportunity to go with the team I am working for? Incredible. Our entire organization was taken to the Super Bowl, but specifically, I went with my girlfriend, Lauren.”

He added that the Super Bowl itself was a day of luxury.

“Everything about the experience was first-class, as you can imagine, thanks to Mr. Blank. We started off at the hotel breakfast buffet, then we were taken downtown to the NRG Stadium on a charter bus,” he said. “Our sponsorship team put on an amazing pregame party at the convention center attached to the stadium. They had a full slate of Atlanta-based artists pump up the crowd at the party kicked off by Big Boi, T.I. and Ludacris right before we went into the stadium.”

The Super Bowl experience not only came with great perks, but valuable knowledge Ringeisen can take with him as he moves forward in his sales career.

“It was great to learn the urgency we were working with in closing sales before the Super Bowl,” he said. “Don’t get me wrong, we are still doing very well, but the weeks leading up to the game were nothing like I had ever been a part of so far.”

Though the game did not turn out the way he hoped, it was still a great memory.

“Now I’m sure that everyone saw the game, so for the first three quarters it was pure joy, followed by the final quarter and overtime, which was not quite as fun,” he said. “Even though the outcome was not quite what we were looking for, it was still an experience of a lifetime.”