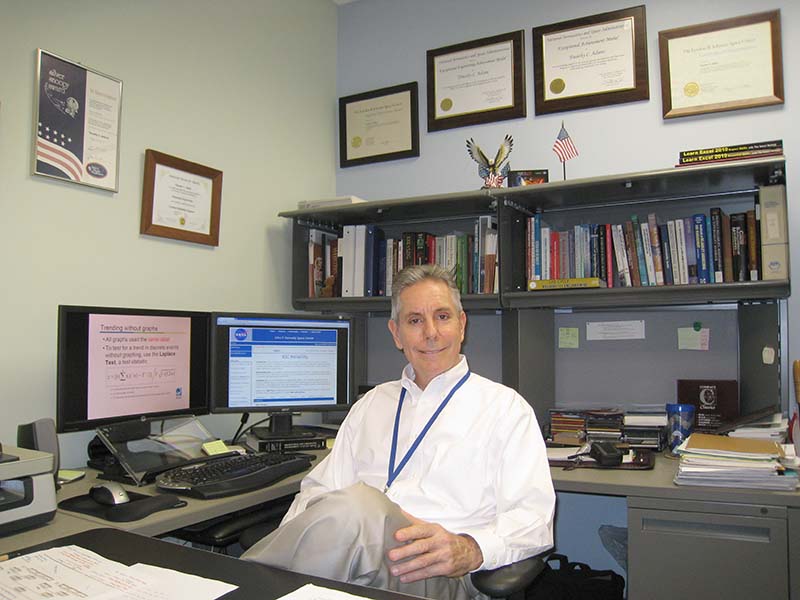 What are you working on for NASA right now?

One focus at the Kennedy Space Center is the design and construction of the ground systems that support the first integrated launch of the Space Launch System (SLS) rocket and Orion spacecraft. The SLS is to be the most powerful rocket ever built. Another focus is the Commercial Crew Program. This program uses contractors to help our country keep a presence in space as opposed to a solely government operation. I work with design, safety and systems engineers who use reliability as a “design to” mark and with decision makers who make risk-based decisions. A typical question I work is: What is the probability item xxx (e.g., power system) will work over a specified period of time, number of demands, or loads under a set of conditions?

Recently, I co-authored a presentation for the 2017 annual conference for the Society for Maintenance and Reliability Professionals. My portion of the presentation was reliability, maintainability and availability (RMA) for the practitioner. My partner’s portion was on condition-based maintenance (CBM).

What was your career path after graduating from Tri-State to where you are now?

I completed a special master’s degree with a two-year internship on a full scholarship with the University of Oklahoma.  This degree program was interdisciplinary and involved studies such as: the community as a system, mathematics and competency-based education. I was introduced to this graduate program by William (“Bill”) D. Collett, my Tri-State roommate and Alpha Sigma Phi brother.

After completing the graduate program, I taught mathematics at Gallaudet College and for the US Air Force, both in the Washington DC area, and later for the Oklahoma State Department of Vocational Education. With this work experience in the design and evaluation of curriculum and not just in the delivery of instruction, I became the coordinator and technical trainer of a customer training program for the computerized numerical control (CNC) machine tools designed and manufactured by Monarch Machine Tool in Sidney, Ohio. I had one advantage in getting this job with Monarch: This company already knew me since I was a Tri-State co-op student with Monarch in design engineering!

With my desire to go into management, complete an MBA and live in a university town, the advertisement of these desires landed me a job to work directly for the plant manager with NL Industries, located near Texas A&M University. Later, the oil business crashed and this NL Industries plant closed.  Not all was lost: I became the operations manager for the City of Bryan, Texas, where, after a few years, I was promoted to executive director of management. One notable accomplishment as director was the successful design, installation and operation of the city’s first 911 public emergency communication system.

All is well—but remember the plant manager with NL Industries? He (Tim Tauer) is now the vice president with one of the companies under Baker International (now Baker-Hughes), an international oil-tool company. He called me and reminded me that I still needed to complete my management studies—and now was a good time to do this with Baker.  I accepted this job and worked in the Marketing Department on a strategic effort to develop a program to train engineers around the world. By the way, later, with Baker’s sponsorship and with a scholarship, I did complete an international management program at the University of Houston. As an important side note: During my relocation to Houston to work for Baker, I had the opportunity to rent a home and live with James H. Newman, who later became a Ph.D. in physics and an astronaut. Astronaut Newman, for example, repaired the Hubble Space Telescope during a space shuttle mission. Within a few weeks after taking the job with Baker, two things happened: the space shuttle Challenger disaster and the crash of the oil business (yes again - five years later). James Newman introduced me to an opportunity with NASA Johnson Space Center’s Mission Operations Directorate (previously “Mission Control”).  My start was with the Control and Propulsion Section, where I reviewed and recommended changes to improve the training of flight crews (astronauts) and flight controllers.  NASA brought it all together for me!

You have been with NASA for 30 years. What changes have you witnessed at NASA during this time?

The space shuttle program, which was fairly new when I started at NASA, has come to an end. The International Space Station was a concept when I started; it is now built and operational.

As I look back and in regard to the space shuttle and ISS Programs, NASA’s business designed the spacecraft as well as the spaceport being the supporting ground launch systems. Today, especially at Kennedy Space Center, the focus is on allowing private enterprise to bring its own spacecraft and operate out of the government-owned spaceport.

Over the years, there has been an increase in the number of women engineers, scientists, and managers and leaders. NASA is and remains a melting pot for universities and businesses across the country.

One thing that has not changed: NASA remains a continuous learning organization. For example, in the last couple of months, I completed short courses in Micro Behaviors, Government Ethics, and Fracture Mechanics.

Thus, NASA’s diversity and learning opportunities are like a “great big” Trine University. For me, this is both challenging and rewarding!

What has allowed you to be so successful in your career?

First, my parents always encouraged me to get an education: “Why? Because it’s something that can never be taken away and can continually grow!” Second, I received a wonderful education from Trine; Trine taught me how to learn “not only for today but for tomorrow as well.” But my opportunity to attend Trine was not a birthright. I remain grateful that Tim N. Clark, my hometown (Sidney, Ohio) high-school buddy, introduced me to Tri-State College at the time. Tri-State being a small school provided the opportunity to see many things.  For example, small classes with various majors (i.e., business, engineering, and arts and sciences) exposed me to variety of viewpoints and skill sets. A little curiosity in Trine’s rich and cozy environment gave me both training and education.  In addition, Trine, the co-op program, and the Alpha Sigma Phi Fraternity gave me confidence.

I have a systems view of life. This view has five disjointed sets (i.e., buckets of life skills and capacities) with each being a sub-system for the system of life. These five skill sets, which I periodically refresh and assess are: mental, physical, emotional, social and financial. To illustrate:

Any day your job can go away — think like a contractor. Find a need and feel it, and treat everyone as a customer. Getting rich fast is nice but an unlikely event. Getting rich slowly with an early start is a likely outcome — especially when all five of the mentioned buckets of life skills have margin.

Is there anything else you would like your former classmates to know about you?

I wish them well and would enjoy hearing from them. I touted the benefits of being independent and self-sufficient. It is not true that I did it alone. We (I for sure) did not and cannot successfully navigate the path of life without help (teaching, coaching and mentoring) from others. So, as my final use of inference: If no Trine, then probably none of the above for me. Thanks Trine!