Three alumni awards were presented at the Touchstone and Homecoming Celebration Dinner on Friday, Sept. 15, as part of Trine University’s 2017 Homecoming events.

After graduating from Trine, McDonald joined the Michigan State Police and graduated from the 119th recruit school. She was assigned to the Monroe Post, where she became a field training officer and background investigator. In 2005, she won the Monroe Post Trooper of the Year award.

She then spent a little over three years as an undercover narcotics officer with a multi-jurisdictional task force, winning the 2007 Southeast Criminal Investigation Division Gerstacker Award, which recognizes an officer who symbolizes outstanding professional ethics, dedication to duty and a concern for giving back to his or her community.

From there, she became a sex offender registry coordinator and sexual assault investigator. In 2014, she joined the Internet Crimes Against Children task force as part of the Michigan State Police Intelligence Operations Division. The task force focuses on investigations involving the sexual exploitation of children, mostly by conducting proactive undercover investigations targeting people who manufacture, distribute and possess child pornography.

She met her husband Michael at Tri-State, now Trine, and they have been married for 15 years. They live in Monroe, Michigan, with daughters Chloe, 2, and Emma, 5. 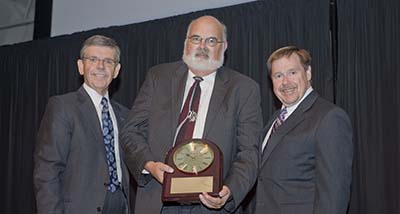 James Bullard, a 1972 civil engineering graduate, is the 2017 recipient of the Distinguished Service Award. The Distinguished Service Award is given each year to an alumnus/ae who has performed outstanding service to society in his or her profession, personal achievement or community; and who has manifest interest in Trine University and has supported it by contributions of time, talent, and money; by recruitment of students; or by placement of graduates.

Bullard worked for the Indiana State Highway Commission from 1973 to 1975 and went on to earn his master of science in civil engineering from the University of Illinois in 1977.

After graduate school he served as a project geotechnical engineer for Northern Testing Laboratories in Boise, Idaho, and ATEC Associates in Indianapolis. In 1981 he became division manager for CME Services for ATEC, and was later promoted to assistant regional manager and senior vice president, where he oversaw a nine-state region. In 1996 he became the Utah operations manager and associate principal for Terracon in Salt Lake City. He returned to Indiana in 2001 to join Geopier Foundation Company, where he continues to work today as lead regional engineer for Indiana and parts of Ohio.

Bullard has served Trine University on the alumni association board of directors for more than 15 years, and is a past president of the board. He currently serves on the university’s Civil Engineering Advisory Board, and actively supports Trine through the Scholarship Gala, Alumni and Friends Golf Outing and various university events in and around Indianapolis. 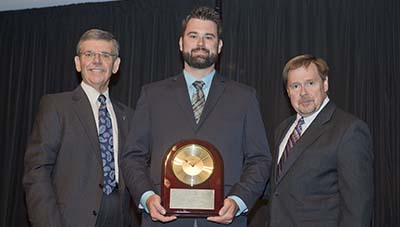 Ryan Ratkowski, a 2008 design engineering technology graduate, is the 2017 recipient of the Distinguished Service Young Alumnus Award. The Distinguished Service Young Alumnus Award is presented to an alumnus or alumna who is 40 years of age or younger, has performed outstanding service to society in his or her profession, personal achievement or community; and who has manifest interest in Trine University and has supported it by contributions of time, talent, and money; by recruitment of students; or by placement of graduates.

Ratkowski works as a research and development product development engineer for Avalign Technologies, Inc., a full-service contract manufacturer of medical instruments, implants and delivery systems for the OEM medical device industry, located in Fort Wayne, Indiana. Prior to working at Avalign, he was an associate product engineer for Symmetry Medical, now Tecomet, in Warsaw, Indiana.

He has been married to his wife, Charleann, for eight years. The couple live in Churubusco and have two daughters — Leah, 5, and Eliza, 2.