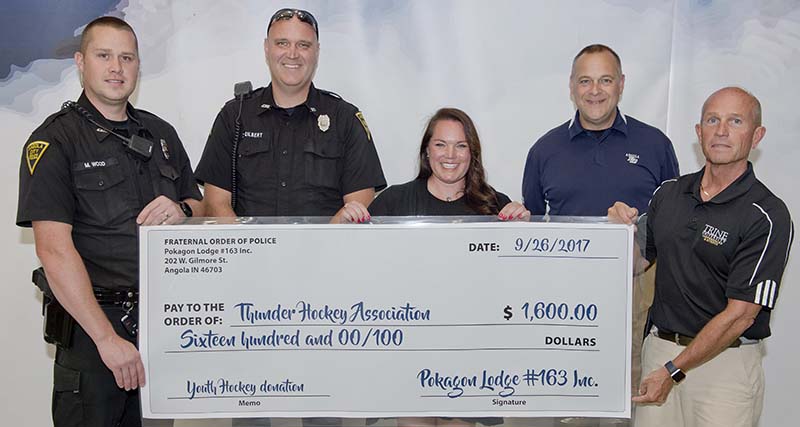 The Fraternal Order of Police Pokagon Lodge #163 has donated $1,600 to the Thunder Hockey Association to help children from financially disadvantaged families cover the registration cost of the program.

“The Fraternal Order of Police receives donations from its members and the community year-round and the mission of the FOP is to use those donations to promote a better relationship between the officers and its youth in the community,” said Mike Wood, FOP treasurer. “Members of the FOP have had the opportunity to volunteer their time to assist in the Learn to Skate program and have thoroughly enjoyed seeing the joy and excitement this new program is bringing to the youth of our community. The FOP wanted to make this donation and volunteer to show the youth we are still committed to them, their future endeavors and this great new program.

“The FOP hopes this donation will assist in keeping an already great program moving forward and will allow more youth of this community the opportunity to get out on the ice and learn to skate or play hockey.”

“We are grateful for the law enforcement officers serving as an integral part of our Learn to Skate and Learn to Play programs at the Thunder Ice Arena,” she said.

For more information on the Thunder Hockey Association and other programs at the Thunder Ice Arena, visit thundericearena.com.