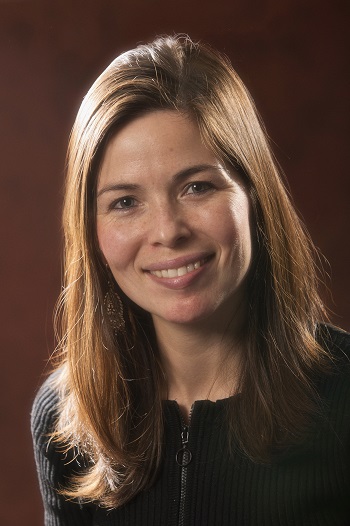 Mari McHenry, director of international community services at Trine University, was part of a team that gave a presentation May 30 to an audience of about 450 international educators on “Supporting Muslim students in U.S. Urban and Rural Educational Settings.”

The presentation was given during the NAFSA: Association of International Educators annual conference and expo in Los Angeles.

McHenry said the idea came from a conversation she had at last year’s conference with Shelly Helgeson of the University of San Francisco during a session on Muslim students.

“We thought it would be interesting to see what different needs our students had in the urban and rural setting, and set out to put together a proposal,” she said.

The session was approved in November. Salma Benhaida of Kent State University and Mazaher Tejani of Columbia University in New York later joined the team.

“While working with our students on survey and interview questions, it become clearer that having professionals of the Muslim faith would benefit the session,” McHenry said. “We emailed fellow NAFSA members and got an immediate response of over 20 candidates to contribute to our studies. We had the privilege of selecting Salma and Maz, who not only are Muslim, but gave us a male and female perspective of the Muslim faith, as well as another urban and less-urban setting for our surveying purposes.”

Over nine months of research, the team found Muslim students had similar issues, regardless of the university and location of the institution.

“The fear of the unknown, the lack of food availability meeting their dietary restrictions, the difference in bathroom etiquette, co-ed group work, and need for prayer rooms on campus were issues all students faced in each of our respective universities,” said McHenry.

The group also found that the college or university setting was where Muslim students felt the most supported, especially after the November election.

“The idea that they were still well-accepted by their professors, staff and peers was very encouraging for all of us to see,” McHenry said.

McHenry said the survey gave those who work with Muslim students motivation to make sure the students have continued support, and to continue to look into ways to offer comfort and peace of mind to students at the various institutions.