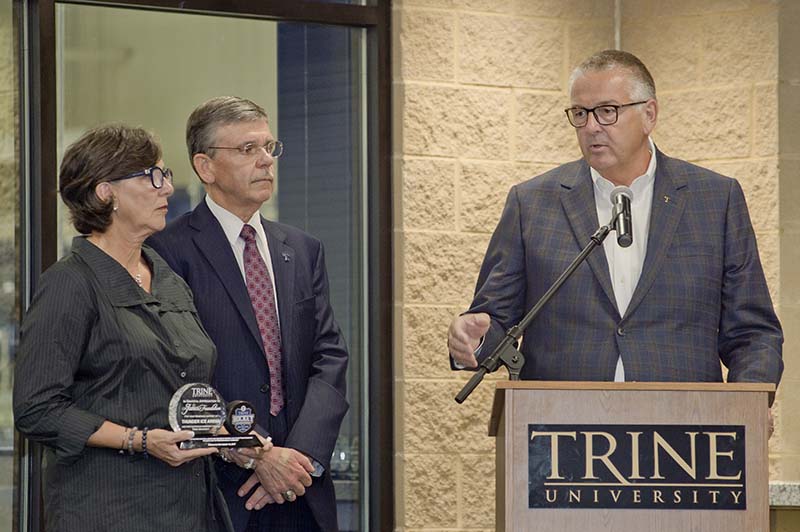 More than a year’s worth of excitement culminated Thursday, Sept. 14, as Trine University officially dedicated the Thunder Ice Arena.

The 46,000-square-foot building will serve as home to Trine University hockey as well as youth and community hockey and skating programs.

“Of all the exciting things we’ve done at Trine University over the past five or ten years, it seems this project has generated more energy and enthusiasm, not only on our campus, but throughout our community and region than anything we’ve done in recent years,” said Earl D. Brooks II, Ph.D., Trine University president.

The university recognized several people and organizations who supported the ice arena with major financial gifts. Drs. Rick L. and Vicki L. James were recognized for their lead gift toward the construction of the ice arena and the MTI Center.

“It’s pretty easy thing for Vicki and me to do this because of what we’ve been able to experience here with Trine University,” said Rick James, a 1977 Trine alumnus and chair of the university’s board of trustees. “Everything you see at this school is done right and done well, starting with Dr. Brooks’ leadership, the senior staff, all the staff, faculty, everybody who works for this school and the students. Everybody who is part of this ought to be proud of what has happened here.”

The City of Angola was honored for its financial contributions and for supporting the university through the process of applying for Regional Cities funding.

“This truly is a partnership and collaboration between the City of Angola and Trine University. We’ve had many and we’re going to have many more,” said Angola Mayor Richard Hickman. “The economic impact that this university has on our community is just unbelievable and maybe immeasurable. … This is going to be great for our whole community. We’re extremely proud to be part of this.”

Michael Galbraith, director of the Road to One Million plan, represented the Northeast Indiana Regional Partnership and the Indiana Economic Development Corporation, which provided $2.8 million in Regional Cities funding for the ice arena and MTI Center.

“I grew up as a kid playing hockey, playing pee-wee, squirt and bantam hockey. We never had anything as exceptional or excellent as this,” said Galbraith. “I want to congratulate Trine University and all of the donors. As a representative of the Indiana Economic Development Corporation, we’re incredibly humbled for you allowing us to be part of this fantastic ceremony.”

The Dekko Foundation, which provided a $2.5 million grant to develop youth sports programs and toward the construction of the ice arena and MTI Center, also was honored.

“We believe that there will be youth who will have an opportunity to participate in something they wouldn’t otherwise be able to because of this ice arena,” said Tom Leedy, Dekko Foundation president, “but there’s another part to it as well. We serve all rural communities in four different states and 13 different counties and when you have a college or university in one of those communities there’s not always a great working relationship between the two. There’s a great working relationship here with Trine University — not just with Angola and Steuben County but the region — and we saw this as maybe an opportunity to take that up a notch by further integrating community into what the university is doing and vice versa.”

The ice arena lobby is named for Larry and Judy Reiners, who were in attendance for the dedication. Larry Reiners is a 1965 graduate from Trine University and a member of the board of trustees.

“Judy and I are extremely proud to be a part of this university. It gave me the education I needed to be able to accumulate some funds to where I’m able to give back,” Larry Reiners said. “She and I enjoy so much coming back to the board meetings. We feel like this is home.”

“I have the opportunity with my occupation to work with small to mid-size private institutions all over the country, and I can you that the things happening here on this campus aren’t happening at other higher education institutions this size,” Cerasani said. “When you look and see what’s happened on this campus over the last 10 years and into the future, that truly is exceptional.”

Other supporters of the ice arena who were recognized included: